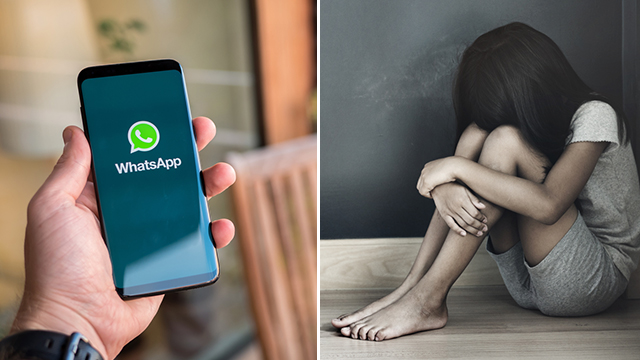 Hundreds of easily accessible groups on the ubiquitous app share videos showing shocking sexual abuse, rape and violence against children — it's all right here in our own pockets, and two Israeli organizations are trying to make it stop.

This story is about some of the most horrifying videos shared on WhatsApp. We apologize in advance, but there's no other way of getting the message across and ending this phenomena without sharing some very disturbing and hard to read information. Merely watching a few seconds of one of these videos scars your soul for good, and the evil is incomprehensible. Young children, some only four or five, are seen being brutally raped by adults, in videos posted in open WhatsApp groups, within anyone's reach. It's horribly easy to share and watch this content, and it has to end. Research carried out in recent weeks revealed dozens of openly accessible WhatsApp groups, in which people freely share videos documenting child abuse and pedophilia. Children are usually about five years old, and their faces are openly revealed, as are some of the faces of their rapists. These videos garnered excited responses in groups with explicit names like "child sex," "child rape" and just "child pornography" (the latter is an Israeli group). Group members encourage one another and ask for more and more videos.

Illustrative images (Photo: Shutterstock)
In one of the groups we found, named "So nice", a member responded to one of these horrific video with a thumbs up emoji, while another replied with an emoji of a cat with heart eyes. A third member discovered that another person in the group (which was actually this reporter) appeared to be a young girl, and tried to call her repeatedly, and then sent begging messages asking that she answer his calls.Then,  when I still didn't answer, he started sending me private messages containing appalling videos of child rape.

In the course of this investigation, we followed openly accessible Whatsapp groups, both Israeli and international, that freely share brutal child pornography. It's a world that operates fearlessly, and shows just how out in the open child sexual abuse actually is. There are hundreds of people using the app to relish in the torture and suffering of innocent children.

Many videos we saw were home made, and some details are too gruesome to share. In one of them, a girl who looked about eight years old and who was wearing a tiara was raped by an adult man. Another girl with blonde hair hid her naked body behind a large black teddy bear, when a man's hand reached out and asked for the toy. The girl gave it to him reluctantly, clearly terrified.

How does this happen?

Right under our noses, WhatsApp has become the biggest platform for sharing videos of violence towards and the rape of young children and even babies. It made headlines when two Israeli organizations, Netivei Reshet" (Online Paths) and "Lokhim Ahrayut" (Taking Responsibility) uncovered dozens of groups and filed a complaint with the Israel Police, attaching 1,300 screenshots and 800 videos. The complaint was widely reported both in Israel and abroad, and WhatsApp announced it had closed 130,000 accounts worldwide in response. But new groups are created regularly and the phenomenon continues unhindered.

We downloaded an app that takes you to international WhatsApp groups and looked under the adult section, where the first options were those for groups about child pornography. We felt relieved when some of the older groups were blocked and the link to join them was cancelled, but discovered many new groups that we could easily join, with profile pictures and cover photos clearly showing child rape and nudity. We saw people leaving and joining constantly.

The videos were indescribable. One of them showed a girl no older than four, wearing a floral dress — and we simply can't bring ourselves to detail what happened to her. We could clearly see that some of the phone numbers in this group start with Israel's dialling code, 972.

"It all started when a teenaged boy called our hotline asked us how to stop his pornography addiction, which started when he was exposed to videos on WhatsApp," says Yona Pressburger, who established the Netivei Reshet organization. "When we saw how bad things were in Israeli groups, we checked the international ones… We realized we're facing a global criminal affair, and that we can't be bystanders to this." The organization then joined forces with Lokhim Ahrayut and filed a joint complaint.

"Some of the most hideous content is of very young children being physically and emotionally abused by family members, it's hard to watch such evil… In some videos it's like seeing murder taking place right in front of your eyes," says Pressburger, who admits he can hardly get over the things he's seen. "Some videos clearly show the gang rape of young girls."

"WhatsApp hasn't rooted out this phenomenon, unfortunately," Pressburger says. "This is a phenomenon of our time. Children are contacted by an adult who asks them to film themselves, and they send him a video. It can be really young children. It's important to raise the parents' awareness."

"We've also been exposed to sexual videos of Israeli girls who uploaded the content themselves. Children want to appear older, make an impression and look experienced even if they are completely innocent," he says.

The two organizations blame the way in which social media companies handle data. "Encryption allows anyone to post whatever they want, including pedophilia," says Nechemia Cohen of Lokhim Ahrayut.

Cohen believes the answer is for WhatsApp to cancel encryption in open groups. "They have to take care of our children," he says. "On Facebook there's zero tolerance for pornography, and we won't find any of that there, and we certainly won't find pedophilia."

"Parental supervision is never going to be enough," he says. "Google has done a good job. They erased hundreds of apps with links to pornography from their app store … WhatsApp made a one-off sweep, but they didn't root it out."

Cohen raised many issues that law enforcement and WhatsApp need to address, regarding the people in these horrific videos. We asked WhatsApp, its owner Facebook and the Israel Police the following questions: Is anyone trying to locate and rescue these children? Are law enforcement bodies trying to identify the men in the videos, or the ones distributing this content and running these groups? Does WhatsApp provide  Interpol with information about these users?

WhatsApp says is using its "most advanced technology, including AI, in order to scan profile photos and block users and accounts suspected of sharing offensive content. We answer worldwide law enforcement queries. Unfortunately, some people use our platform to share harmful content and it is our duty to put a stop to this."

The police said in response: "We do not comment on ongoing investigations, especially in sensitive matters that have to do with the virtual sphere. Pedophilia is a serious phenomenon and the Israel Police handles it firmly, through every possible legal path."