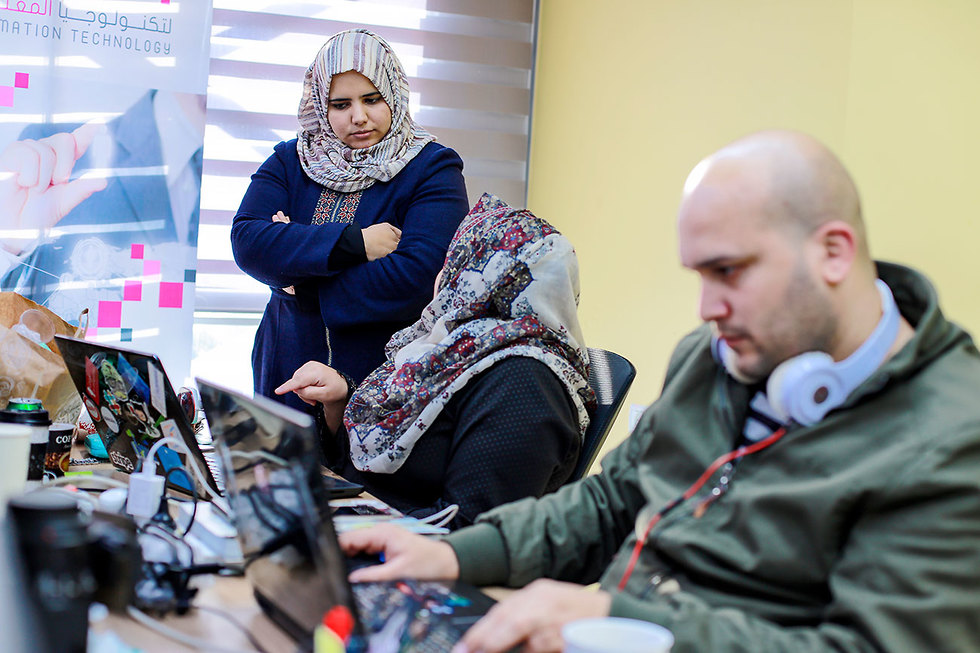 Gaza's entrepreneurs: Dreams and ambition in a tough neighborhood

“My biggest challenge is that I am from Gaza,” said Muhammad Fouad, laughing bitterly, in response to the question “what is the biggest challenge for entrepreneurs in Gaza?” Fouad, 21, is a software engineering student and has already launched a start-up company dedicated to developing and maximizing the potential of companies.

“Last year, we set a goal for ourselves to increase our activities but as of now we are working solely with businesses and companies in the Gaza Strip. We have no choice as this business requires trust between the client and ourselves,” Fouad said. He intends to expand his operations to include Ramallah and Amman, Jordan.

Over the summer, Fouad visited Amman as part of a program run by the US Consulate in Jerusalem to support a select group of young Palestinians. As of now, a young entrepreneur from Gaza seeking to expand his business does not qualify for an exit permit according to Israeli criteria.

Ynet spoke recently with a number of young Palestinian entrepreneurs from various fields. Although they don’t know each other, their dreams and challenges were found to be very similar. They are all trying to fulfill their dreams in one of the most difficult of places — the Gaza Strip. Suma al-Nahal studied communications but from a young age she would draw and was attracted to art. Gaza’s high unemployment rate and the meager chance of her finding work in her field led her back to her original passion. She received funding from an international organization and established her own business in 2013.

Suma al-Nahal (Photo: Asam Khalidi, Gisha)
Suma makes jewelry, specialty greeting cards and journals for school children. She says that her prospects shone at first and orders exceeded her expectations. But that changed in 2017 when the economic situation in the Strip worsened due to sanctions imposed by Palestinian President Mahmoud Abbas leading to a decrease in the purchasing power of Gaza residents. “Generally, successful businesses grow over time, but in Gaza the opposite occurs. Even if people like your product, if there is no money we have to decrease operations and often even close the business.” If initially Suma’s business would take in NIS 1,000 a month, her current revenue is down to NIS 300, at best. “Art is important but it is not a basic daily necessity at a time when people are concerned over how to feed their families.”

Suma al-Nahal (Photo: Asam Khalidi, Gisha)
All the people we spoke to expressed their desire to expand their business outside of the Gaza Strip but that is the point in which they face difficulties leading some of them to quit. Authorities at the Rafah Crossing to Egypt, which is supposed to be open daily, impose strict limits on the amount of people allowed to enter and exit Gaza and most entrepreneurs don’t mee the criteria necessary to cross at the Erez Crossing into Israel. Hanan Hashan seeks to merge her profession of digital marketing with female empowerment, with regards to information technology. In that respect she gives lessons in digital marketing to young women with potential.

Hanan Hashan (Photo: Asam Khalidi, Gisha)
Hashan also runs a company that seeks to open a window into the wider world, no easy task. “We work with American companies but simple tasks such as transferring funds from the US to Gaza are complicated. There are significant limitations with regards to money entering Gaza due to the geo-political situation therefore we are required to send the money through a third-party nation.” In addition, “people abroad have trouble trusting us because we are in Gaza. They also fear that business ties with us may create difficulties for them with their government. For them, doing business with Gaza entails considerable risk,” she adds. Few people are aware that Gaza has a number of technological incubators with start-ups striving to succeed and grow their business. Fatima Ashour, 25, was a project manager at the Palestine Information and Communications Technology Incubator (PICTI). Most of the projects undertaken under her administration have been sold to companies outside of Gaza.

Fatima Ashour (Photo: Asam Khalidi, Gisha)
One of the main obstacles facing Gaza entrepreneurs is the difficulty in getting to international conferences and specialty exhibitions. “Participation in international conferences and meeting potential clients is critical for us in order to improve our ability to market the services we offer,” Ashour says. “Every year we attend a big technology fair that takes place in Dubai, but this year we did not manage to obtain the necessary exit permits from Israel and we also did not manage to leave via the Rafah Crossing. Therefore, we asked our clients from Saudi Arabia to represent us,” she adds. Ashour says that Palestinian high-tech companies in Gaza adapt to the reality of commerce limitations. Accordingly, most companies operate in the field of software, not hardware. They face an obstacle which for most Israelis is taken for granted: a dependable electricity supply. In Gaza, where on average there is only eight hours of electricity a day, incubators must rent office space in buildings with generators so that it can supply power all day. “Rent is high but we have no choice,” she says. “Because internet access is critical for our work, we must rent space in a building where reliable electricity supply is guaranteed,” adds Hashan. “The costs are high but we decided that we needed a place that can supply us with the ideal conditions for our work.” But not all young Gaza entrepreneurs can afford to rent space in such a building due to the high costs.

Yet they remain optimistic

Gaza entrepreneurship is not limited to technology. Fawziya al-Kurd from Rafah had a dream to turn her love for pastries into a career. She opened a small pastry shop that now produces goods that are sold throughout the Gaza Strip.

Suma al-Nahal (Photo: Asam Khalidi, Gisha)
“There is no doubt that the economic crisis in Gaza over the last year and a half has negatively affected purchasing power and it shows in our sales,” al-Kurd says. “Marie Antoinette’s famous adage ‘if there is no bread let them eat cake’ does not apply in Gaza it seems. People pass by our shops and look but don’t buy anything because they need to provide basic food for their families and that is more important. “But we really want to expand our product marketing to the West Bank and we have embarked on a process which we hope is successful,” she says expressing optimism despite the difficulties. In fact, all the entrepreneurs we spoke with said that optimism is the name of the game for them, which might explain why they are in the field. “Of course I am optimistic,” says Hanan, “there is no reason why the Israeli start-up nation should not reach Gaza as well. If all the youth, regardless of religion, nationality or geographic location join hands together — the world will be a better place for all. If we have a technological development for artificial intelligence and there is an Israeli company that deals with that, why shouldn’t we join hands out of mutual interest?” The human rights organization Gisha (whose goal is to protect the freedom of movement of Palestinians, especially Gaza residents) said: “Small businesses in Gaza cannot expand without access to the immediate markets in the West Bank and in Israel. Most of the men and women who participate in the workforce in Gaza do not fit the arbitrary criteria set by Israel for passage through the Erez Crossing. “Israel also does not allow commercial mail from Gaza nor does it allow for the export of small amounts of goods from Gaza to the West Bank,” they added. “Being the power that controls movement by land, sea and air, Israel is obligated to allow for Gaza residence professionals to come and go from the Strip, provided they undergo the necessary security checks, so that they can fulfill their personal and professional ambitions to grow their business — and its circle of dependants —and participate in developing the local economy.” Israel's Coordinator of Government Activities in the Territories (COGAT) issued a response saying: “Business and factory owners are invited to export their produce through the Kerem Shalom Crossing, subject to a security check. Currently, it is possible to export furniture, textiles, Formica and certain agricultural produce, dependant on the quality of the produce and protecting local botany. We encourage entrepreneurs from the Gaza Strip to turn to us with regards to exports, in every field, and every such request is examined against security and professional considerations. Israel has also authorized the export of playground facilities and iron doors to the West Bank, but to date no business has expressed interest.”