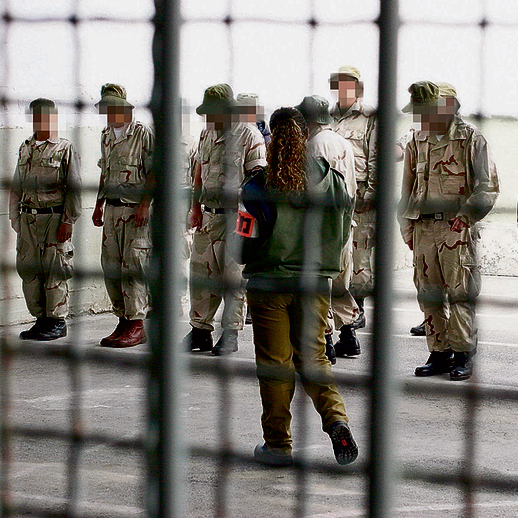 Orange is the new khaki

Thanks to a widespread lack of army detention facilities for women, female IDF soldiers get sent to jail for minor offenses, while male soldiers serve their time at facilities on their own base and are given cleaning duties.

The IDF fosters discrimination between men and women in its prison facilities — or rather the lack of such facilities — for women who commit minor crimes.

Male soldiers who commit disciplinary offenses are tried to serve prison time in their base, in a special in-house facility designed for the purpose. However, female soldiers are sent away to military prisons for any offense that calls for jail time, due to lack of separate facilities for women. In fact, not a single army base in Israel has an assigned detention facility for female soldiers.

Galit (an alias) was sentenced to six days of incarceration during her training course for a prestigious role in the IDF, after she posted a picture of herself in uniform on social media. “It wasn’t a serious offense,” she says, “but since there was no detention facility in my base I was sent to prison.”

“There’s a big difference that has to be pointed out,” says Galit. “Men who execute such violations serve time on their base, or on a different base. They do basic chores (mostly cleaning) and their commanding officer is the base’s master sergeant. They get to keep their phones. If they commit serious charges they get sent to military prison, where people are separated by the type of offense they have committed.”

“Since female soldiers have no in-house detention facility,” says Galit, “even though I was a distinguished soldier and had only posted a picture on Facebook, I was sleeping in a dorm with another girl who was a drug dealer, and others who were charged with violent offenses or had tried to commit suicide… We weren’t allowed to make eye contact with our commander, it was humiliating… I could only make a call once during that week, from a pay phone. All this could have been spared if there was an in-house separate detention facility.”

Galit says she believes the system failed her.

“I didn’t understand what I was doing in the IDF (after that incident). Why do I even want to become an officer? They dressed me up like a felon anf cut me off from the outside world, while men who do the same have cleaning chores. It’s unequal and wrong."

But, Galit says, the lack of facilities for womemn means that some are unpunished for their crimes.

“Women often don’t get sentenced to serve time if they commit minor offences just to avoid putting them in army prison," she says. "Sometimes women end up avoiding trial altogether. I believe the army should have an equal environment with no discrimination — for better or worse.”

Tamar (not her real name) tells a similar story. She is a soldier in a classified intelligence unit, and after she committed a mild security breach she was sent to five days in prison, while a male soldier who committed the same act served time in their base in much easier conditions.

A senior IDF prison official says that conditions for women in army prisons are indeed more difficult, which often has an impact on sentencing.

“There is an unjustified discrimination, female soldiers have to endure a more difficult experience (during their prison time)," he says. "In cases such as these, it’s wise to spare those who committed a one-time minor offence of serving prison time.”

Other unnamed IDF officials agreed, and added that unequal incarceration conditions need to be amended.

The IDF Spokesperson's Unit says that as the number of female soldiers sentenced to serve prison time is significantly lower than the number of male, "there is no in-house detention facility for women."