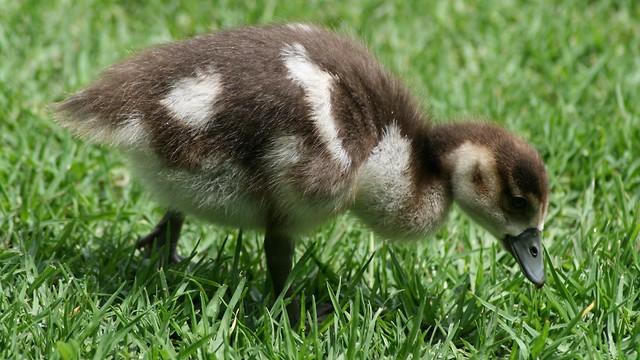 An Israeli traffic cop recently found himself on a most unusual mission: rescuing two baby geese from the busy Ayalon highway in Tel Aviv.

The rescue began when the occupant of a vehicle spotted the chicks in the middle of the highway as cars and trucks zipped past, stopped the traffic and called the police.

“Hello police? Send a car urgently to the southbound section of the Ayalon, near the university," the caller told the police dispatch. "There are animals right in the middle of the road and one has already been run over."

Goose chicks on their way to safety (Photo: Police Spokesperson)

Members of the public assisted the police in gathering the chicks from the road, while the two adult geese hovered nearby, following the rescue. The chicks were then put in a police car and carried to the nearby HaYarkon Park. The parents followed the resuce from the air — and safely reunited with their chicks in the park.

“The chicks were released, and then the mother saw them from afar and then approached. The family is united,” the police officer told the dispatch.

“The excitement and the support from all the drivers around filled me with joy and satisfaction, and it made me feel like I’d done my duty—with the help of civilian who did a good deed,” the officer said later.

The geese make it to the park. (Photo: Police Spokesperson)

The Israel Police Traffic Department also expressed satisfaction that the rescue concluded successfully, saying that “saving lives is our mission, and we will continue to work tirelessly— anywhere and anytime — to do our job professionally.”

Egyptian geese are famous for their part in ancient Egyptian history and archaeology. They were considered sacred by the Ancient Egyptians and found in much of their artwork, and are widespread throughout Africa.

Because of their popularity and attractive appearance, the species is common in captivity around the world, and geese often escape— creating feral populations in Europe and the US.