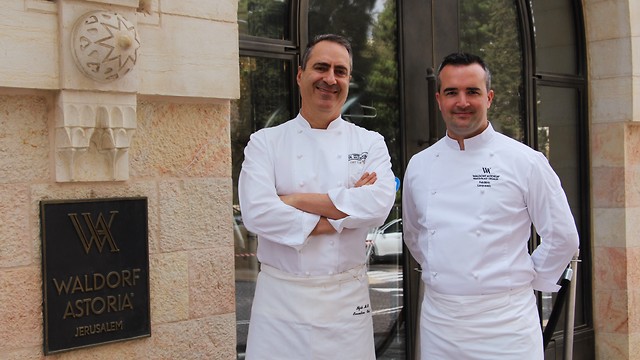 A French kosher feast at the Waldorf Astoria

The executive chef of The Waldorf Astoria Jerusalem, Itzik Barak, is collaborating with his colleague Frédéric Larquemin, executive chef of The Waldorf Astoria Trianon Palace Versailles, on a special dinner menu being served at the Palace Restaurant the first half of this month. Each course of the gourmet dinners is being paired with premium wines from Carmel Wineries.

Chef Larquemin, who has worked with world-renowned Michelin-starred chefs Gordon Ramsay and Alain Ducasse, has participated annually with Chef Barak at international Taste of Waldorf Astoria culinary competitions, where both chefs achieved recognition from Waldorf Astoria Hotels and Resorts. This is their first collaboration in Israel, where Chef Larquemin is confronting the challenge of creating a gastronomic experience while adhering to the strict laws of kashrut.

Chefs Itzik Barak (right) and Frédéric Larquemin
Earlier this week, journalists were introduced to the chefs and invited to taste some of the food and wine that will be served. Aperitifs included Carmel white and rosé sparkling wines.

The preview meal started with a butternut squash velouté, served in a demitasse, as an amuse-bouche. The velvety soup, which also contained wild mushrooms and roasted pumpkin seeds, was delicious, and accompanied by freshly baked French baguette.

The first course was roasted sea bass fillet on a bed of celeriac confit, alongside broccoli and cauliflower florets and thinly sliced zucchini. Interestingly, red wine jus was poured tableside over both the fish and vegetables -- a particular combination I had yet to encounter, but one which worked admirably well.

The white fish was paired with a crisp Riesling from Carmel’s Kayoumi vineyard. The alternate fish course that is being offered to restaurant guests is salmon ballotine with fresh herb cream, capers and lemon zest, paired with a Chardonnay.

Our main course was roasted lamb ribs served with ratte potato cream and root vegetables with star anise aroma. The two lamb ribs were served together like a double lamb chop, resulting in a succulent cut of meat thicker than any steak. The lamb was served with yet another red wine jus, although this one was more like gravy than the previous one.

The root vegetables consisted of al dente parsnip, carrot and beet, while the red wine that was paired with this course was a Carmel Shiraz, also from the Kayoumi vineyard. The other choice of main course is chicken stuffed with chicken liver, spinach and watercress mousse, paired with a Carmel Merlot.

There is a vegetarian option as well, paired with the same red wine: a lentil casserole with lemon-glazed vegetables.

The final course is a choice of two very different, but equally tempting, desserts: a citrus tart with lemon cream and grapefruit marmalade, or the chocolate and pecan delight, with yuzu cream and fruit sorbet.

The dessert wine with each is the Carmel Gewurtztraminer, a sweet wine made with special late harvest grapes.

The Palace Restaurant at The Waldorf Astoria