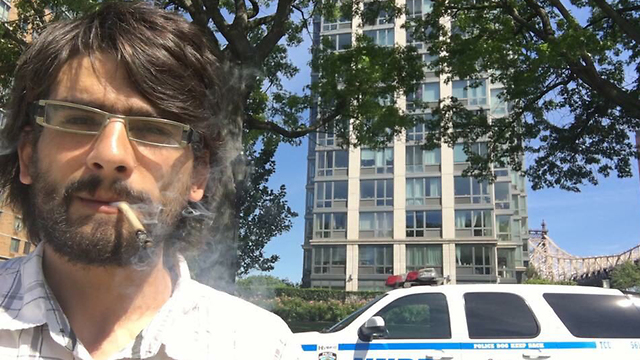 ‘Telegrass steps in where the state fails’

Amos Dov Silver was interviewed shortly before a massive police raid threatened to bring down the sophisticated cannabis distribution network he founded, Telegrass; He was arrested along with 41 other suspects Tue.; Confident that police cannot turn the clock back.

“If you think the police can eliminate Telegrass, you are mistaken,” said Amos Dov Silver, founder and director of the popular online marijuana distribution network, only hours before Ukrainian police raided his Kiev hotel room.

“Police cannot do anything to us, it will take them years to bring this down,” said Silver in a defiant interview to Yedioth Ahronoth just before the cannabis empire he founded was dealt a lethal blow , two years after it was founded, with the arrest of 42 senior operatives in a major police sting Tuesday.

Silver
Amos takes us back a few years, to explain how all this came about. “I was having difficulty with so many people asking me where they can obtain cannabis and I had no way to help them. I received many such requests because I was an activist in the matter. And it tied right in to the predicament weed dealers were in, that they had trouble finding customers for their product. “They began asking me to refer them to reliable people (buyers or sellers),” he continues. “And from there it developed gradually. First with fictitious Facebook profiles, then it became too much and we moved to Telegram where we began building a complex, secure system… And we improved with regards to customer complaints regarding quality, prices and market competition. I believe that competition is the solution.” He says that competition in the cannabis market reached a point where the sellers have to seek out buyers instead of the other way around.

(Photo: Shutterstock)
In the past, a dealer would not have to invest in marketing; today they must invest much time and energy in branding. Do you recall dealers advertising three years ago?

“Certainly not,” Silver responds. The two things that have developed in recent years are the amount of openness in the market —the public is accepting of openly discussing cannabis use; and increased competition. More people are competing over the same market share so they use more radical resources to attract attention… Many dealers have developed clever bots to help with sales.”

I speak with dealers and they tell me that they spend large amounts of money and that in today’s market, it isn’t sufficient to just have good quality substance but you must also understand branding and marketing. Dealers are running complicated operations compared to the past. Things have changed.

“Currently, it is quite complicated to manage a dealer’s operation… And Telegrass adds difficulty because each dealer is on his own,” he responds.

As the man in charge of Telegrass, are you involved in all the content and advertising? Can you veto certain content?

“Certainly; together with the others we came up with standards regarding what is legitimate and what isn’t. But outside, anyone can advertise as they see fit, as long as we can control our own content.”

What has stopped the police from putting an end to your business?

“Firstly, your premise is wrong; they cannot simply do that… All of our databases are stored on encrypted servers and the police don’t have access.

One of the suspects in court (Photo: Motti Kimchi)
“Say that an undercover cop manages to bring down one dealer — we still have 4,000 dealers,” he boasts. “It would take the police four years to take them all down, if they put aside all their other tasks, they lack the manpower. Now consider also that all our dealers check the customer’s Facebook and ID prior to a sale. It isn’t simple… and chances are that a judge would release us with a slap on the wrist and the police will be disappointed. There is really nothing they could do.” Assaf, a Telegrass customer told Ynet: “I want to take this opportunity as a citizen to thank the police for taking upon themselves this matter and doing the work… Considering the amount of resources and energy being invested in this I find it quite bizarre.” Will you have trouble acquiring the substance?

“I don’t think so. Grass, cannabis and all of its derivatives, including medical grade, for those suffering from serious illnesses, as well as those who merely want to use cannabis for its calming effect and personal pleasure, it’s all very common in Israel on a very large scale."

“There are many dealers who have cultivated a small community of people who trust them, friends and people with medical conditions. Many have turned to Telegrass out of frustration of what they experienced in dealing with the Health Ministry(‘s cannabis department). These small communities will continue to exist. Telegrass provides a great service where the state fails.”