Pillar with the sculpture of a predatory animal 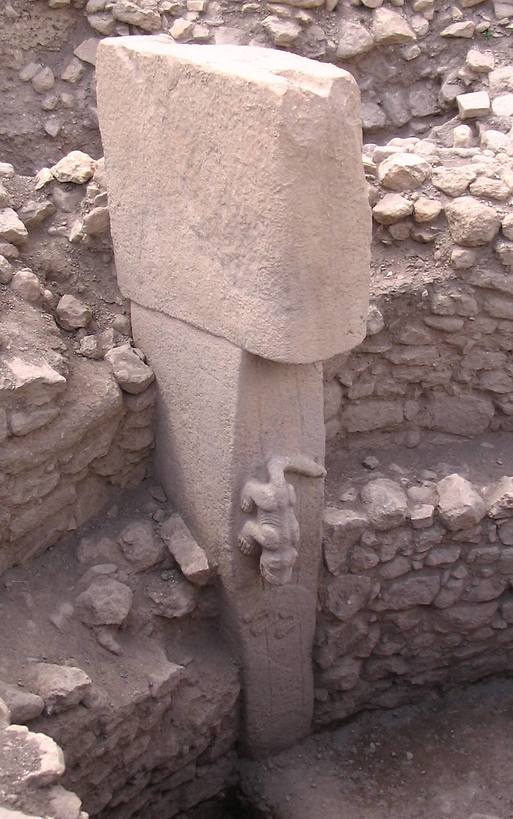 A 12,000-year-old Neolithic shrine site with bizarre animal-shaped pillars baffles researchers; will Erdogan be able to make this site, perhaps the world’s oldest temple, draw tourists to a forsaken area by the Syrian border?

Turkish President Recep Tayyip Erdogan has officially inaugurated Göbekli Tepe, a site dating back to the 10th millennium BCE, in a bid to boost tourism to the region and raise awareness about its historical significance.

In the presence of officials at a special ceremony last weekend, Erdogan called Turkey “an open-air museum,” according to the Ankara-based Anadolu Agency, and declared 2019 the “Year of Göbekli Tepe” in honor of the 12,000-year-old archaeological site.

Pillar with the sculpture of a predatory animal
Turkish officials hope the site will draw throngs of tourists and provide an economic boost to the country.

Believed by some scholars to be the world’s oldest temple, Göbekli Tepe – which means “Potbelly Hill” in Turkish and is located in the southeastern province of Şanlıurfa – predates Stonehenge by some 6,000 years. The complex features massive pillars, ancient trash pits and fertility figurines made out clay, as well as intricate sculptures depicting animals.

The ruins were first unearthed in 1963 following a survey conducted by anthropologists from Istanbul University and the University of Chicago. However, it was not until 1994, when the late German archaeologist Klaus Schmidt examined the site in depth, that its significance began to come to light.

According to Schoch, the site “overturns the standard story which states that civilization first developed a mere 5,000 to 6,000 years ago,” and “demonstrates the hallmarks of civilization, such as monumental stone architecture that required well-organized social structures, symbolic notation and sophisticated knowledge underlying the orientation and erection of the structures.”

He added that Göbekli Tepe is making experts “rethink” the origins of civilization.

“It is now evident that civilization developed prior to the end of the last Ice Age. However, this early civilization suffered a mighty setback resulting from the severe climatic changes and accompanying havoc…. It would take another 6,000 years for humanity to rebuild and regain the level of sophistication that we see at Göbekli Tepe.”

While many have referred to the temple as the world’s oldest place of worship, Dr. Ted Banning, a professor of anthropology at the University of Toronto, disputes the claim and believes the ancient structures found there might have simply been houses for people rather than gods.

“Clearly, the Turkish government has taken the view that the temple’s claim is good for tourism,” said Banning, who has conducted research at the site.

“There is no doubt that that has had great resonance with the public, as dozens of websites with rather outlandish claims about the site attest,” he went on. “Really, the only aspects of the site that lead people to think these are temples are that, one, the buildings are quite big; two, some of the pillars are quite massive; and three, there is art on many of the pillars.”

Banning notes that a significant amount of rubbish deposits from food processing and the making of stone tools was discovered at Göbekli Tepe, things “archaeologists routinely find” at the sites of Neolithic settlements.

“I think the site demonstrates that the early Neolithic people there (and probably at other nearby sites, such as Karahan Tepe) already had a higher degree of social complexity than archaeologists had suspected,” he explained.

Despite disagreeing on the area being a temple, he believed the ancient culture there “had rich ideology and complex social structure” and “invested a lot of effort in building monumental houses.”

Despite ongoing disputes over its original purpose, many local and international tour agencies are including the site in their programming ahead of what is expected to be a spike in visitors. One of the challenges these agencies face is its proximity to Syria and conflict zones.

“We cannot say that millions visit this site each year – visitor numbers have been relatively modest,” said Nicholas Kropacek, the marketing director for the Eastern Turkey Tours travel agency. “This has been a function of the fact that the region of Turkey in which Göbekli Tepe is located shares a border with Syria. I should point out that the proximity to the border with Syria has not affected the safety of the site or of the principal city here, Şanlıurfa. The area around Şanliurfa has been safe throughout the period of unrest in Syria.”

Kropacek nevertheless underlined that his agency had witnessed a “big increase” in inquiries about the site and the region in general, and has already taken hundreds of tourists to see the ruins.

“Göbekli Tepe is now listed as a UNESCO World Heritage Site and is a key component of the government’s strategy to promote tourism,” he noted.

“While traditional beach tourism remains the mainstay of tourism in Turkey, cultural and historical tourism is growing,” he continued.

“Göbekli Tepe is probably the most important archaeological site currently being excavated anywhere in the World. Part of its great appeal is the fact that it is an ongoing excavation and will be ongoing for many years to come. Each excavating season yields more knowledge and reveals more of this extraordinary site.”