Protest at the Gaza border fence 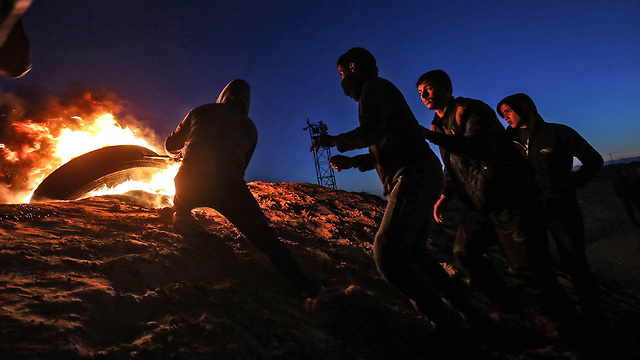 On eve of first anniversary of protests, UK-based, Arabic-language paper says terror group will only stop weekly demos as part of larger plan to end Israeli, Egyptian blockade on Strip, currently only ready to accept 'quiet for quiet'

Hamas has refused to halt Friday protests or night-time disturbances along the Gaza border fence despite the current round of fighting with Israel, the London-based, Arabic-language newspaper Asharq Al-Awsat reported Wednesday.

Israel's Air Force has been bombing Hamas targets in Gaza since Monday evening, hours after a rocket that Israel believes was fired by the terror group directly hit a home north of Tel Aviv and wounded seven people.

According to the report, Hamas will only consider this proposal, made by Egyptian mediators trying to restore calm between the two sides, as part of a wider plan to end the blockade on the Gaza Strip imposed by both Israel and Egypt. As far as Hamas is concerned, the paper says, the only acceptable agreement is "quiet in return for quiet."

Palestinians in Gaza have been protesting at the Israel border almost every Friday since last March, and this weekend will mark the first anniversary of the demonstrations, dubbed the March of Return protests.

According to the Supreme Commission for the March of Return, the anniversary demonstration will take place next Saturday, and not on Friday as is customary. Palestinians will also mark Land Day on Saturday, commemorating 1976 protests over Israeli appropriation of territory in which six unarmed Arabs were killed and around one hundred others were wounded.

The Supreme Commission has called for a general strike in Gaza, the West Bank and East Jerusalem, and urged Israeli Arabs to participate.

Around 180 Palestinians have been killed in the weekly border clashes with Israel since the protests began a year ago.

The respite in the violence was broken late Tuesday when Gaza militants fired a rocket at the Eshkol Regional Council, drawing retaliatory air strikes from the Israeli Air Force a short time later.

The military wings of Palestinian factions in Gaza said the rocket fire at the Gaza border community was conducted by “rouge elements” in the Strip without their approval or knowledge. There were no reports of casualties or damage.

The airstrikes targeting Hamas positions - including a military compound and a weapons-manufacturing facility - continued well into the night, with Palestinian militants firing rockets at the southern city of Ashkelon, which were intercepted by the Iron Dome defense system.

The Israeli military said the aerial attack was carried out in response to the rocket fire from the Gaza Strip, as well as the launching of airborne incendiary devices and violent demonstrations along the security fence.