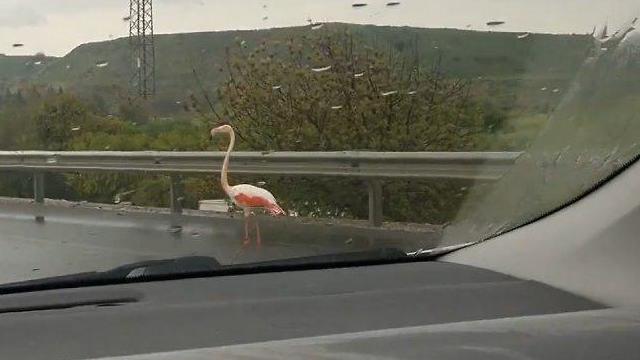 Drivers on Route 4 were caught in an unusual traffic jam after a pink flamingo escaped the main zoo of the Tel Aviv area, and decided to take a stroll in the middle of the busy highway amid pouring rain

Israeli drivers stumbled upon a rare sight on Sunday morning when a flamingo took a stroll on one of the country’s busiest highways in a middle of a rainy day.

The flamingo, named Shulman, apparently escaped the Ramat Gan Safari Park - the main zoo of the Tel Aviv area - and was brought to the nearby Route 4 by strong wind gusts in the area.

The safari park representatives said the flamingo was eventually safely returned to the zoo with the help of policemen and concerned civilians.

"This morning we were notified that Shulman ventured outside the safari, apparently he had flown away with the assistance of strong winds," said the safari officials.

"The safari team were immediately in pursuit of the flamingo and within a few minutes, through the cooperation of good-willed citizens and policemen, he was located and returned to us," they added. "He was examined by our hospital staff … and released to the open area, where he was joyfully greeted by his friends."

Liav Krutik is one of the people who filmed the exotic bird on Route 4. "I was riding on my motorcycle like any other day, but then, in the midst of torrential rain, I found myself caught in an inexplicable traffic jam. Then, all of a sudden, I saw a flamingo sitting in the middle of the road,” he said. “At first I thought about catching him, but when I got closer, he got up and started walking.”

Flamingos are found on all continents except Australia and Antarctica, but their population is very sparse. In Israel, flamingos are migrant visitors during winter months, with up to 60 of these birds winter in the Eilat areas. The Ramat Gan safari currently boasts 15 flamingos.