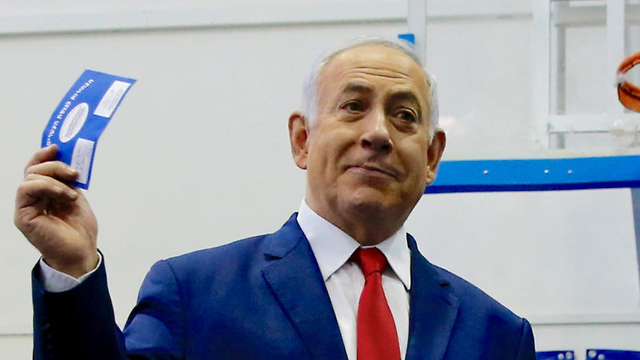 Opinion: This election is not about pressing issues such as the volatile security situation or the catastrophic state of the health system, it is about one thing - whether we want more of the same regime or will take a chance on something new

As Israel decides its fate at the ballot box, it is worth pointing out that no ideology is up for election this time. There are no urgent issues to consider such as the volatile security situation, the sensitive economic situation, the catastrophic state of our health system, or ordinary issues such as religion and state or Jews and Arabs. All these matters will be left for other days.

In other election campaigns -  when the state returns to normality - these issues will again top the agenda. When Israel goes back to election campaigns that are conducted as in any civilized country and not as on a battlefield where it is acceptable to hurt the enemy in any way, on any subject, in an election campaign that is a mess of crude lies, manipulations, malice and corruption.

Netanyahu at the polls on Election Day (Photo: Reuters)


We must not forget why Israel is holding an election eight months before the date enshrined in law. It is because Netanyahu wanted the elections to happen before the decisions about his legal woes became public. Israelis are voting because Netanyahu wanted to preempt any decision by Attorney General Avichai Mandelblitt, and let the voters make a decision without all the pertinent information.

But Israelis already know. And they also know more information that could well lead to further legal proceedings. Like a ball of yarn with a loose end that is unravelling wildly, Netanyahu's investigations could spin out of control in the coming months. Therefore, as Israelis vote, they must not forget that they are there purely because Netanyahu wanted to save himself from legal peril. All that concerns him at this point in time is saving himself from three serious indictments, one for bribery, and the other two for fraud and breach of trust.

He believes that if he wins the elections, it will be far more difficult to demand his indictment, and a right-wing government that he heads, like the one he dreams of, will find a way to keep him in power through another term.

The only issue before the public is if it truly wants the Netanyahu government to continue - under a prime minister who will be blackmailed during coalition negotiations, pressured by the pillars of his next government - Bezalel Smotrich, Moshe Feiglin, Itamar Ben-Gvir, Naftali Bennett, Aryeh Deri, Yaakov Litzman and Moshe Gafni, swayed by his wife Sara and son Yair.

It will be a right-wing ultra-Orthodox government, racist, homophobic and xenophobic, and - after we all saw the bizarre footage of Feiglin smacking an interviewer's bare feet - one could even say lunatic.

A government led by a prime minister whose only interest in the election is to be elected, and once elected will be devoted to meetings with his lawyers, lengthy court hearings, attacking and slandering his opponents. Is this what we want – more of what we have had so far - or after 13 years of Netanyahu's rule, do we want change? Are we satisfied with what we have, or do we want to give someone else a chance?

Do we even remember what we once looked like? Not in the eyes of the world, but rather in our own eyes. Not the eyes of the young people born into a world in which Netanyahu is prime minister, but in the eyes of us, the adults. Have we lost faith that things can be different, that this is not our inevitable destiny, that this is not an inescapable part of reality - a cacophonic culture of lies, endless scandals, incitement, abuse of power and hedonism? Are we tired of yearning, hoping and dreaming? Are we even willing to try something else, something cleaner, something quieter?

Now is not the time for soul-searching. This is an emergency situation. In every election campaign we say that this is the most important election campaign that has ever been or ever will. But this time, more than ever, we must understand what we are up against.

This is not a decision about crucial issues regarding the future of the country. This is a decision regarding the fate of the country. How our country look like on Wednesday morning? Who will be the education minister responsible for teaching our children and grandchildren? Are we prepared let a finance minister who has no sensitivity or social compassion decide on the fate of our parents?

Don't say it could never happen. Netanyahu is willing to go even further to survive than entrusting the education portfolio to the hands of Smotrich and have Feiglin as his finance minister. Look at what he was prepared to do in recent days, namely endanger the very existence of other right-wing parties, such as Shas, a party that has totally rallied in his support over the last few months, and the New Right party, whose leaders Naftali Bennett and Ayelet Shaked pledged to back Netanyahu to form the next coalition.

On Monday, at an event at the prime minister's residence, Sara Netanyahu called Shaked and Bennett "leftists" and suggested to the journalists who came to interview the prime minister that they should check the bedroom activities of Shaked, the justice minister in her husband's cabinet, and Bennett, his education minister.

Benny Gantz is not the ideal candidate. He has made a lot of mistakes. Some of these errors he has corrected, and others we could discover in the future and be perturbed by then. It would have been nice to have had someone with more political experience, and with more ambition.

But Gantz has proven that he knows how to put up a fight, especially when none of the things said about him made him an unworthy candidate. It is also true that he will need far more to form a coalition than the Labor Party and Meretz, many of whose voters he has already stolen. But he is the hope for change. For something new. And we should be giving Gantz a chance.

So at the polls, Israelis should not have thought about the big questionsbut one simple one: Bibi or not Bibi.

There was no point thinking about a two-state solution, just of the country we want to live in.

And if Bennett and Shaked are "leftists" - so too can we all be.