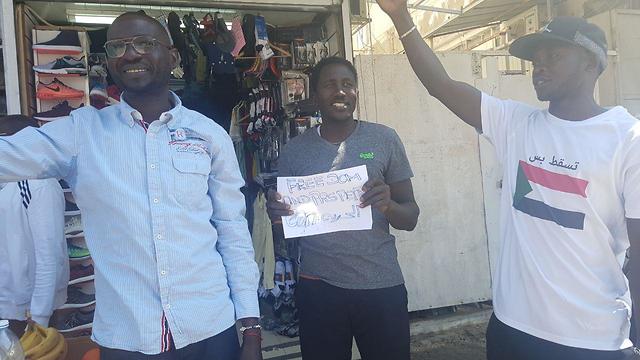 Fall of Bashir brings no change for Israel’s Sudanese refugees

The courts deliberate how long asylum seekers must wait for the government to respond to their requests while the situation in Sudan still unsafe for their return; lack of diplomatic ties means Sudanese community will not face deportation to home country

The fall of the man who ran the Sudan with an iron fist for three decades, President Omar Bashir, appears to be having little or no effect on the plight of that nation’s refugees who sought safety in the Jewish state.

Experts say the primary reason is the absence of diplomatic relations between the two nations.

Emanuel Navon, senior fellow at the Jerusalem Institute for Strategy and Security, explains that refugees are not at risk for deportation to Sudan from Israel because the two countries lack formal ties.

“The fact that Omar Bashir is toppled doesn’t change anything in the absence of diplomatic relations,” Navon says. “If there is a new regime that is willing to have diplomatic ties, which is unlikely, that would be a game changer.”

“Until there are new diplomatic relations, there is no threat of their deportation,” she says. But adds that they do face major obstacles

“They have very basic rights, and neither social nor health rights. Their visas do not permit them to work but the state has committed not to enforce this because many of them have been here for such a long time.”

Celebrations in Sudan after Bashir is ousted (Photo: Reuters)

The High Court of Justice is now considering how long Sudanese refugees, from Darfur and South Sudan, must wait for their asylum requests to be answered. While there have been several hearings, the latest, taking place last month, Abbo does not expect them to make a decision anytime soon.

“Our experience with the Israeli court system suggests it will take a while.” Abbo says, while Bashir’s ouster might even delay the decision further. “The state has a more ‘valid’ excuse now to say they need more time to consider their asylum as the situation in Sudan is unclear.”

Few believe anything will change citing a decade of inactivity.

Monim Haroon, a Sudanese refugee living in Jerusalem, is stuck in bureaucratic limbo.

“I submitted my asylum request in 2013 and I haven’t heard back yet,” he says.

Emanuel Navon explains that while the government has not always been expedient in processing asylum requests, deciding individual asylum cases is even more difficult because refugees cannot always prove they are indeed refugees.

"We use the word ‘refugees’ but it hasn’t been established. Physically, they reached Israel by crossing through Egypt," he says.

"But in order to be considered refugees, their lives would have to be in danger in Egypt. This raises serious questions about their claim about whether they are actually refugees," he adds.

“It is unknown why many Sudanese are stuck in a 'grey zone,' whether it is a mixture of legal fuzziness and maybe a lack of efficiency,” Navon says, in an apparent attempt to help unravel the knots of bureaucracy.

Monim Haroon actually was shot at by Egyptian forces while crossing the Israel-Egyptian border.

Blaming the State of Israel for his mistreatment, including imprisoning him for two and a half years, Haroon nevertheless differentiates between the Israeli government and the rest of Israel.

“The government has called us ‘infiltrators’ saying that we are a cancer in the body of Israel, but Israeli society accepted me and never treated me in a racist way. I have a real respect for Israeli country and society, also for the military as well…The Israeli army saved my life and treated me with dignity.”

Haroon explained that the military welcomed him and other refugees into Israel after running from Egyptian army fire, which killed some in his group.

“The Israeli army came and said welcome and brought us in army trucks to their bases. They gave us food and medical care; I could not forget their treatment… It was a very emotional moment for me because I thought we were going to die.”

Anat Ben-Dor, clinical instructor at the Refugee Rights Clinic at Tel Aviv University, explains that repatriating refugees to their homeland is a process which takes time. “In refugee law, in order to return people, you have to ensure their return will be done safely. A coup does not qualify as such,” Ben-Dor says.

Monim Haroon says his first and main goal is to go home.

“When there (is) real change in the government, people will leave voluntarily, and the (Israeli) government will not need to deport us,” he says.

“These people are worse than Bashir. Maybe he ordered us killed, but they are the ones that killed us. The chairperson of Sudan’s transitional military council, Abdel-Fattah Al-Burhan, killed my family and burned down my village in Darfour.”

Now a student at Jerusalem’s Hebrew University studying politics and business administration, Haroon wants to use his degree to help the Sudanese people, once it is safe to return.

“I want to go back to my country and help build a new democratic liberal country.”