Egypt is unlikely driving force behind 'deal of the century'

Opinion: Netanyahu has apparently convinced Trump that Egyptian President Sisi should be the one representing the Arab side in the peace plan - over the White House favorites Saudi Arabia - which raises questions over who really formulates the long-delayed proposal

No leader, intelligence chief, or ambassador in the Arab world knows the full extent of President Donald Trump’s Middle East peace plan dubbed the “deal of the century." The changes to the peace proposal are still being made and the final draft will most likely be unveiled in early June after the holy month of Ramadan. There is one change, however, that has already become quite apparent, the extent of Egyptian President Abdel Fatah al-Sisi’s involvement in the agreement.

Initially, Saudi Arabia was meant to be the Arab world’s representatives in the deal, but Trump’s “excellent friend” Sisi has recently found himself in the driver's seat. Although many in the United States have an issue with both of them - Saudi leader Mohammed bin Salman is linked to the murder of journalist Jamal Khashoggi, while Sisi’s government has a problematic human rights record - Prime Minister Benjamin Netanyahu has swayed Trump's heart in favor of the Egyptian leader.

The Israeli view of Sisi is different from the way he’s perceived in the rest of the world (in some cases as a dictator). To Israeli government he is a neighbor and a partner who watches over the Sinai Peninsula - where thousands of Israelis are spending their Passover holidays - along with Israel. 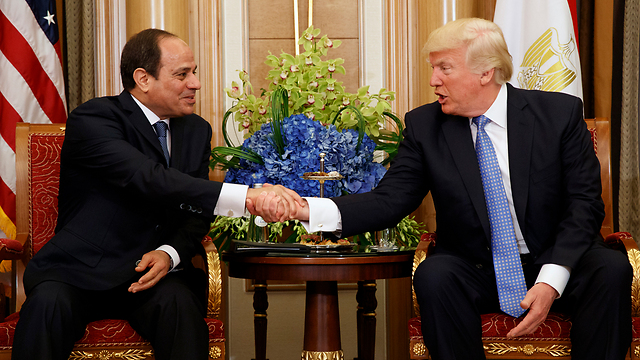 Sisi has in the past already been a recipient of Trump’s preferential treatment. When the Egyptian president made it clear to the White House he doesn’t intend to confront Iran - either in Yemen (where Iranian-backed Houthi rebels are trying to topple the government) or through the means of US sanctions on the Iranian regime - Sisi was given an all-clear from Trump and a warm welcome from Tehran.

Sisi’s main role in the deal - even though he probably doesn’t know all the details himself - is clear: to recruit the moderate Arab world into supporting Trump’s peace plan. The Egyptian leader can potentially recruit Jordan, Morocco, Saudi Arabia, the Persian Gulf states, and perhaps even Qatar, which despite being at odds with the Saudis, maintains a warm relationship with Egypt. Sisi has already taken a step in this direction by announcing that Egypt is committed to the two-state solution.

However, Palestinian President Mahmoud Abbas, with whom Sisi met in Cairo on Sunday, is fed up with the Egyptian leader and his domestic woes are much more pressing.

Basically, the deal is being formulated on the down low as we speak, like a transaction: Netanyahu recommended, Trump placed the order, and Sisi is the one getting the package. Egypt will lead the Arab world to accept the so-called “deal of the century”, and will be asked for its input in the proposal before all the details are finalized. In return, the Cairo administration will receive a massive economic aid package from the US government.

It seems as though Netanyahu's fingerprints are all over this peace plan, to the extent that it’s not clear who really formulated it. What is clear, however, is the advice on Egypt’s role in the long-delayed agreement is being given to the White House directly from Jerusalem.