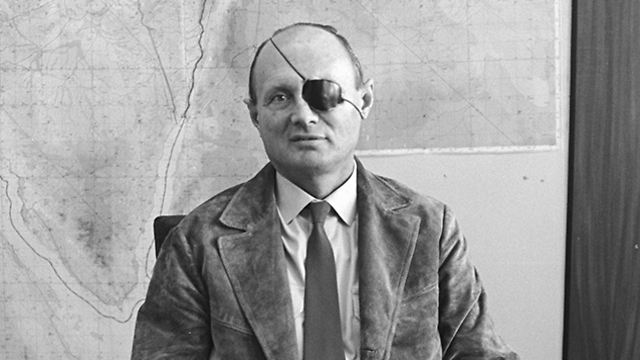 From the Labor Party to the settlements, there is one family whose presence reaches across history, war and peace and even the arts and whose names are prominent in every aspect of the state since its inception

The Dayan family has been prominent in Israeli society — with respect to military, politics and culture — since the founding of the state. Its most famous son, Moshe, was recognized universally by the eyepatch he wore following an injury sustained fighting Vichy French forces in Syria in 1941.

The Dayan family has its roots in Ukraine, and they were among the founders of Moshav Nahalal in the Jezreel Valley. It was a working class Moshav with socialist ideals, but that did not prevent Moshe Dayan and his cousin Yigal Horowitz from joining Menachem Begin's government as foreign minister and finance minister, respectively.

Moshe Dayan (Photo: Bamahane, courtesy of the IDF archives at the Defense Ministry)
The family patriarch, Shmuel Dayan, was a MK for Mapai (Israel Worker's Party), which later evolved into the Israeli Labor Party. Shmuel and his wife Devorah had two sons, Moshe and Zohar. Zohar fell in battle fighting the Syrian Druze Battalion in the North during the War of Independence.

Dayan family
Zohar's son Uzi was only three months old when his father died. He went on to become the deputy chief of staff for the IDF and a major general, and is now set to be sworn in as a new Knesset member with the Likud Party.

Uzi Dayan
Uzi isn’t the only Dayan family member to find himself on the right of the Israeli political spectrum. Another Moshe Dayan served as Israeli ambassador to Guatemala; his son Danny is a prominent settlements advocate and currently serves as the consul general in NY. He was previously the chairman of the Yesha Council of Settlements, an umbrella organization of West Bank local governments.

Danny Dayan in NYC
Investigative journalist and television anchorwoman Ilana Dayan, best known for the TV program Uvda (Fact), is a first cousin of Danny Dayan. Her father Mordechai was among the directorate of the Jewish National Fund and her grandfather Aryeh was a cousin of Shmuel Dayan.

Ilana Dayan (Photo: Reshet)
Former president Ezer Weizmann was married to Rauma Schwartz, a sister of Ruth, Moshe Dayan's first wife. The two public figures were known as the "in-laws." Both Dayan and Weizmann served in political positions on either side of the political spectrum.

Moshe's daughter Yael Dayan is an author, journalist and former politician in the Labor Party. Her daughter Dr. Rachel Shion was wed to attorney Yishai Sarid, son of the journalist, author and prominent left-wing politician Yossi Sarid, a political opponent of Moshe Dayan.

Yael Dayan with Uri Avnery
Dorit Sarid, Yossi's wife, was the daughter of Prof. Ben Zion Warbin, an outspoken tight-winger who quipped that in order to maintain harmony in the family, he would avoid discussing politics with his son-in-law.

Moshe's son Assi Dayan was an actor and film director who died in 2014. He was involved in the creation of some of Israeli cinema's best cult classics including anti-war satire Giv'at Halfon.