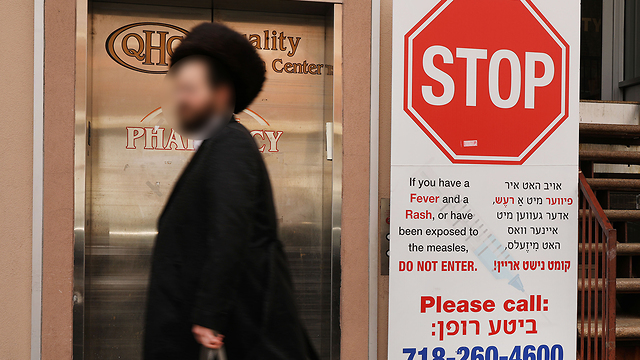 New York's ultra-Orthodox believed to be source of measles outbreak

As the measles outbreak continues to spread, causing growing fear in its wake, NY communities of ultra-Orthodox Jews, face accusations that they are a contributing source for the outbreak of the disease.

Though according to community leaders, up to 97% of their members do adhere to the vaccination program, dictated by the health authorities, a minority still holds out, despite efforts, by religious leaders and physicians, to educate them that the MMR vaccine as the cause for autism, has been scientifically disproved.

Additionally, religious and community leaders including 500 local rabbis have published in the Jewish papers, a public manifest to assure readers there is no question of dietary restrictions on the vaccine, while keeping kids who have not received the vaccine out of schools is acceptable and in fact required in order to protect other children. Rabbi Moshe Sternbuch, of Jerusalem, added Orthodox Jews are obliged to vaccinate their children.

Early this month, NY mayor Bill de Blasio issued a state of emergency in-an-effort to block the spread of measles in New York borrows. He banned children who could not prove they were given the vaccine, from entering schools. He also warned he would fine families $1,000 for every child that is not vaccinated.

Measles is a highly contagious virus and the large number of children in every family and the cramped living conditions in the ultra-Orthodox communities, who separate themselves from the outside world, contribute to the rapid spread of the disease.

Anti-Semitism is a real concern in the American Jewish communities as well as among health authorities. The New York Times published a story about a woman shopping with her toddler, that ran out of the store leaving her purchases behind after a religious Jew came in and coughed. " let's go Jews aren't vaccinated", she told her young child.

Some though think concentrating on the Orthodox Jewish communities while other communities around the country are also refusing to vaccinate their children, is the real anti-Semitism