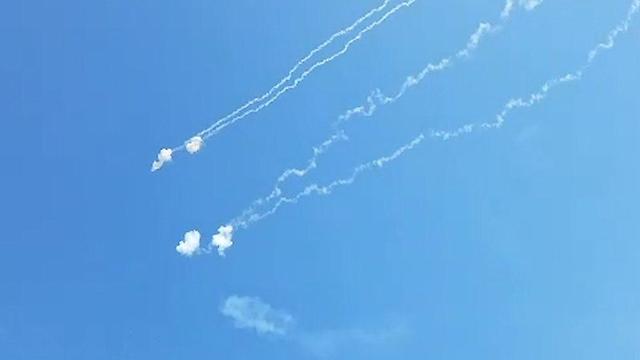 Some 50 sirens were heard in the southern city of Ashkelon Saturday morning, and the Iron Dome intercepted several rocket launches from the Gaza Strip.

The cities of Rehovot, Sderot, Ashdod, and communities in the Gaza border region in the Sha'ar HaNegev and Eshkol Regional Councils were also targeted. In Ashkelon, public shelters were opened.

No injuries or damages were reported so far.

The IDF retaliated with tank fire on a Hamas lookout post and an IAF attack on Hamas positions in the Strip.

The events come after a relatively calm few months with no Palestinian casualties.

One IDF soldier was lightly wounded from shooting fragments in Friday's riots, while the other was moderately wounded from a bullet to his thigh. The IDF reacted with tank fire.

During Friday clashes on the border fence in the Strip's south, one Palestinian was killed from IDF fire, and a second was injured and died of his wound during the night.

The overnight Air Force strike that killed two targeted a Hamas military facility; a Hamas statement said the casualties belonged to its ranks, and that one was an area commander and the second a lower rank militant.

Hamas' deputy commander Khalil al-Hayya said in a statement that the organization was acting to push Israel to do its part in the arrangement negotiated between the sides.

"Israel is delaying in acting on some of the conditions that were agreed on. We won’t let that happen, we have a schedule, and have many options. We know how to make Israel do what it said it will," said the official.

The Islamic Jihad terror group said in a statement that Israel is behind the recent "dangerous escalation".

"The Palestinian people is using its right to defend itself. The resistance is committed to this right as long as the aggression and the siege are ongoing," said the statement.

The Friday and Saturday events follow several firebombs launched from the Gaza Strip into Israeli border communities that caused fires on Wednesday and Thursday. The Islamic Jihad launched a long-range rocket into Israel Monday, which fell at sea, and signaled the beginning of this weeks' flare-up.