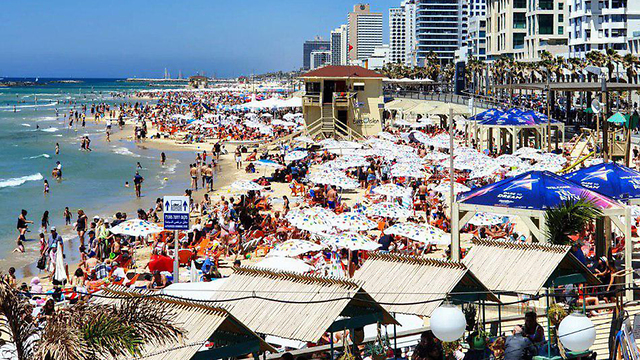 Eurovision week kicks off Israel amid with increased security

Tel Aviv's Eurovision village will open Sunday with musical performances and a food market launching, while special security precautions are in place; Israeli entrant Kobi Marimi says it is 'amazing' to be on stage on his home turf

Israel officially began its week of events for for the 2019 Eurovision Song Contest in Tel Aviv on Sunday, amid tight security and with approximately 20,000 police on hand. This year's competition is titled "Dare to Dream."

The highlights of the week include two semi-final competitions scheduled for May 14 and May 16. The Grand Final, which will take place on May 18, is one of the world's largest musical events, and will be broadcast live to an estimated 200 million viewers.

The Eurovision Village at Charles Clore park in central Tel Aviv was also to open Sunday with musical performances and a food market to mark the occasion.

Eurovision kicks off with a party in Tel Aviv (Photo: Oren Aharoni)

Hundreds of foreign journalists and TV cameras have already gathered at the Expo Tel Aviv, while thousands of tourists were expected to arrive in the city.

For Israeli entrant Kobi Marimi, the chance to perform on his home turf is tremendously exciting. His song, "Home," was written especially for him after he won the competition to represent his country.

"It was amazing, being on this stage," the 27-year-old Marimi said Friday after his first rehearsal, according to the Israeli media. "I’m always emotional, and I feel like I’m about to cry."

He also brushed off criticism over the song, which bookmakers do not expect to be placed in the top 10.

Marimi, who will be flanked onstage by five backing singers, will perform in the 14th spot on Saturday night.

Israel, like Australia, is one of the non-European nations to take part in Eurovision. It is hosting because its 2018 entrant Netta Barzilai won with her hit song "Toy."

Israel's military is on high alert with troop reinforcement on the Gaza border in advance of this Wednesday's Nakba Day (Day of Catastrophe), an annual day of commemoration of the displacement 700,000 Palestinians from the newly formed state of Israel in 1948.

The Iron Dome defense system will also be deployed in the border area as well as in the center of the country in order to protect Eurovision events from possible attempts on the part of Hamas and the Islamic Jihad to disrupt the competition.

In the last round of violence for Gaza, earlier this month, 700 rockets were launched at Israel killing four civilians and injuring dozens more.