Netanyahu responds the AG's decision to indict him
Photo: AP 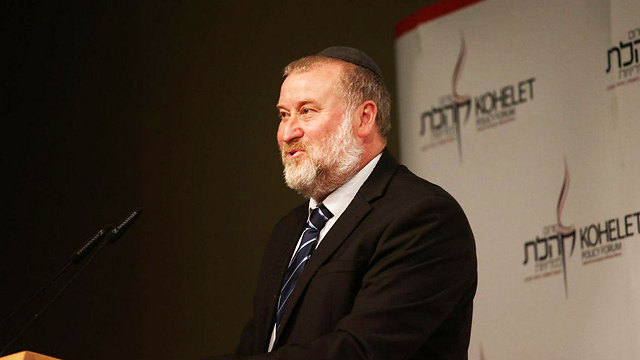 Avichai Mandelblit expected to grant 10-day delay for scheduling a pre-indictment hearing for prime minister in string of corruption cases, casts doubt on defense lawyers' claim they do not have time to prepare

Attorney General Avichai Mandelblit said Sunday that a messenger sent by his office tried to deliver materials pertaining to the corruption charges against Prime Minister Benjamin Netanyahu along with a cover letter, but the prime minister's lawyers refused to accept them.

As a result, the AG  - who was once Netanyahu's cabinet secretary - emailed the letter to the office of Netanyahu lead counsel Navot Tel-Zur and is reportedly considering his next steps.

The attorney general also called for charges of fraud and breach of trust in both Case 1000, in which Netanyahu and his family are suspected of receiving illicit gifts from wealthy donors such as Israeli Hollywood producer Arnon Milchan, and Case 2000, in which Netanyahu allegedly tried to negotiate favorable coverage in the Yedioth Ahronoth daily (Ynetnews' sister publication) in return for promoting legislation against rival paper Israel Hayom.

In his own missive, Mandelblit responded to a letter sent last week by the defense lawyers affirming that Netanyahu is interested in having a hearing ahead of any indictments, but asking that a new schedule for the hearing be set, as they believed they would need more time to prepare for it.

Mandelblit said in response that he "considers the hearing a very important part of the process" and intends to enter it with an "open heart and a willing disposition." He added, however, that "it is hard to accept a claim of a vast amount of material that must be studied in a short time, when it is made by those who have been refusing to accept it for a long period of time."

He said that the defense team "is allowed to ask for different things in the course of the hearing process, and all requests will be considered carefully." He also informed the attorneys that all the material required for the hearing was in digital form "in order to better facilitate preparation for the hearing."

In his written response to Mandelblit's attempt to deliver the material on Sunday, Tel-Zur claimed that he was not on hand to accept the delivery when the AG's messenger arrived. He also repeated his decision not to accept material relevant to the hearing as he and his colleagues have not yet agreed to represent the prime minister because the question of payment has not yet been resolved.

This was the same reason given by the lawyers when they initially refused to receive any materials relevant to the hearing in early April 2019.