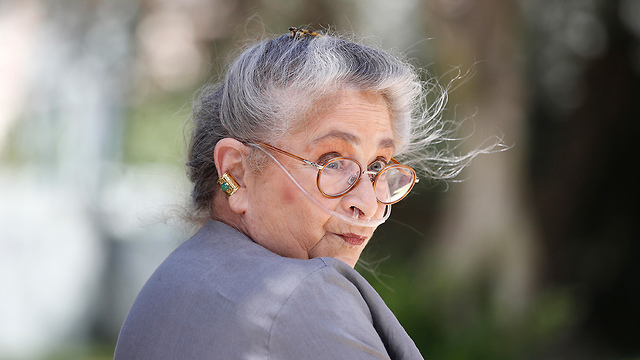 Friends, colleagues and admirers remember the kindness and warmth of Nechama Rivlin

Admired by all for her humanity and her grace, the First Lady devoted her time to advocacy for women, the disabled and the disadvantaged, who all mourn her loss; 'She was never judgmental, always to the point and full of humor,' says artist Yair Garbuz

The staff at the president's residence, lowered the flags to half mast on Tuesday, following the death of First Lady Nechama Rivlin, who passed away earlier today, one day short of her 74th birthday.

Rivlin will be laid to rest Wednesday afternoon at Mount Herzl cemetery in Jerusalem. Her friends and admirers as well as many of the Israeli public who have met her over the years recalled Tuesday of her bravery and her love for both people and nature.

Nechama Rivlin (Photo: EPA)
"She was very open and direct and, in my opinion, very brave," says artist Yair Garbuz, remembering his decades-old friendship with the first lady.

"She was never judgmental, always to the point and full of humor," he added. And although the two had different political views, Garbuz says, "Nechama never labeled people."

Nechama Rivlin in her garden at the President's Residence

Writer and psychologist Tsippy Gon-Gross, who worked with Mrs. Rivlin on selections for literary awards, called her an amazing woman with a deep and genuine warmth.

"(She was) genuine, not like someone had painted a smile on for her," Gon-Gross says.

The writer lost her husband in 2017 to the same illness that claimed Nechama Rivlin, an affliction about which the first lady was candid.

"She addressed a conference on lung transplantation at the pulmonary institute a few years ago," says Gon-Gross. "She spoke openly about her hopes difficulties breathing and the hope for recovery that comes with a transplant."

Dr. Mordechai Kramer from the Institute of Pulmonary Medicine at the Beilinson Medical Center, who was Rivlin's physician for the past 12 years, said that Tuesday was "a sad day for the whole nation, for us here at the hospital and for me personally. She was not just my patient. She was my valued friend."

Nechama Rivlin was know for her advocacy for the disabled. In an article in Ynet's sister publication, Yediot Aharonot, Rivlin said: "we are all disabled. Some disabilities are more visible than others. Thought today there are more disabled in the work force, it is not enough and more should be part of the military and the work force."

Amir Balaban, from the Society for the Protection of Nature in Israel, remembered the first lady as a true lover of nature who became involved in many nature projects.

"We have named even named one of our prized gazelles after her," he said. .

Renana Meir, whose mother Dafna was killed in a terror attack in 2017, remembers the warmth and genuine interest Rivlin expressed when they met after the deadly attack.

IDF Chief of staff Aviv Kochavi recounted Mrs. Rivlin's frequent visits to military bases, where she always looked out for the welfare of the troops. Speaking on behalf of the entire military, he expressed condolences to the president and his family for their loss.

Nechama Rivlin had worked at the Zoological department at the Hebrew University of Jerusalem for 30 years before retiring in 2007. Her co-worker Yael Shimoni remembers her always bringing cake for everyone and being followed by her loyal dog.

Rivlin also volunteered with the Israel Prison Service, where her friends also remembered her warmly as someone who showed  compassion for the prisoners.

An advocate for women, Rivlin was remembered by the Israel Women's Network today as a model of feminine leadership

The Association of Rape Crisis Centers in Israel also mourned her loss, with CEO Orit Solitziano saying Rivlin's feminism was quiet but forceful.