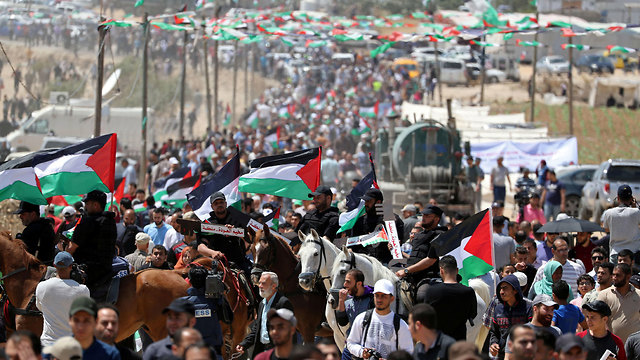 The Gaza Strip's militant factions on Wednesday warned that Egyptian mediation efforts Israel's "foot-dragging" in following through with certain ceasefire arrangement could lead to an escalation beginning with border protests later this week.

"We insist on holding our Eid in the locations of Jihad, the bond to the land and the marches of return, to communicate to the people of the world that the people of Palestine, and the people of Gaza, will not break and their determination will not break," Senior Hamas official in Gaza Khalil Al-Hayya said Wednesday, on the first day of the three-day Muslim festival of Eid al-Fitr.

A top member of the committee organizing the weekly "Great March of Return" protests on Gaza's border with Israel told Haaretz daily that Palestinians are demanding more aid be transferred from Qatar, further loosening of import restrictions, and continuation of humanitarian initiatives.

However, Israel does not believe that Hamas is looking to go to war.

"Hamas is quite deterred from war. It has no interest in going to war at this time, and it's deeply interested staying in the course of what they call an arrangement, in which they expect to receive certain concessions," Head of Israel's Military Intelligence Directorate Major General Tamir Hayman said on Wednesday.

While some Palestinians in Gaza see the security situation as calm, others note that conditions (apart from additional hours of electricity and widening of the fishing zone) have not gotten significantly better since the previous deadly escalation in early May.

Rocket fire from Gaza during the last comonth's escalation of violence (Photo: EPA)

In accordance with Egyptian mediation efforts, Hamas agreed to keep protesters far from the fence and stop incendiary devices from being sent over the border via balloons and kites. However, "terror balloons" have caused nearly a dozen fires in Israel's south in the last two weeks.

Nonetheless, recent weekly protests have been relatively calm. It remains unclear if Gaza factions will continue directing Gazans against tensions or if Hamas will follow through on its threat to escalate.