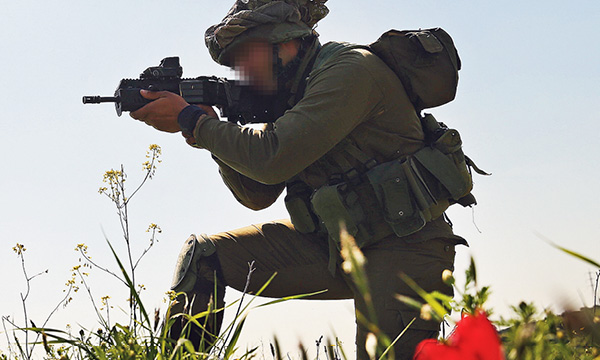 The secret life of the elite Muslim IDF soldier

Private A. does not believe in talking politics with his brothers in arms in the Golani Brigade and his extended family think he's studying in Europe; but, he says, 'it is such a good feeling to see that I make people feel safe when I carry my weapon on the train or at the bus station'

Clad in his IDF uniform, Private A. looks no different to his brothers in arms in the elite Golani Brigade. It's been five months since he enlisted, and like everybody else, he's busy with the rough training, chatting with his girlfriend before lights out and dealing with his anxious parents back home.

But Private A. is no regular soldier. He's the talk of military town and was even invited for a Shabbat meal at his brigade commander's home.

A. himself doesn't understand all the fuss, but since he's one of only two Arab Muslims who enlisted in the November draft, and the only one to choose a combat unit, he agreed to be interviewed. He says so it is others can follow in his footsteps.

Keeping his details obscure is important, not so much for A.'s sake, but rather for all his family members who were told he's studying machine engineering somewhere in Europe.

A. tells us all the little lies he tells his cousins and grandfather to keep the show going.

"When they asked me to send a picture and saw I was really tanned, they wandered how this happened in cold, snowy Europe," he says. "I told them that I went to a tanning salon," he laughs.

Private A. is 20, and grew up in a city with both an Arab and a Jewish population. He has two sisters and a brother who's also about to enlist next year, and isn't afraid to talk about how he was bullied as a child.

"I can't even imagine how these people would pick on me if they saw me now, as a soldier," he says.

A.'s parents pushed him to work hard and achieve his goals. "before I wanted to enlist, I wanted to become an engineer, and before that my dream was to finish high school," he says. "Many of my childhood friends do manual labor since they didn't finish high school." A.'s story took a surprise turn five years ago, when he wanted to start attending a Jewish school to improve his grades, but was declined. He was able to attend a Jewish school and do very well in his matriculation after his family decided to move south, to the city of Be'er Sheva, and when all his classmates started talking about the army, A. wanted to fit in.

When he went to the IDF draft base and asked to enlist, he was refused a combat role because he was overweight.

"They said, 'go home, get rid of 60 kilograms and come back', they didn't mind at all that I was Muslim," he says.

And what did your family say about you enlisting?

"My dad was supportive; he said he'd be there for me whatever path I chose to walk…. My mom, like all mothers, was scared because of the combat role. But I told her that I believe in faith and explained that I want to defend my country." So why can't you say you're a soldier back at home then? "The place where I grew up is problematic. I didn't really care but my mom was worried, and that was her condition for allowing me to enlist." Private A. is on his way to become part of Golani's commando unit. When he enlisted, he was offered a few brigades but chose Golani, since "Golani is like a family." "The commanders here are really supportive of me and push me forward. I don't get any special treatment and I like it, but I do feel like I get more help because being here is my choice, unlike all the others."

"I feel like I've met people here that will stay with me long after the army," he says. "I've never heard a single racist comment here, not even as a joke. I pray five times a day and there's always a person by my side laying Tefillin… I fast on Ramadan, and the others on their (Jewish) holidays."

Private A. had to leave home when he enlisted, and lives in a Petah Tikva apartment with other lone soldiers, the term for troops who do not have family or familial support in Israel.

"I don't visit my family, they visit me," he says. "My mom comes with boxes of food and takes my laundry home, but is careful to wash my uniform at the laundromat."

"I could have stayed with my parents and come in and out of the neighborhood in plain clothes," says A., "but I wanted to show off my uniform and my weapon. I want to finish my training and to wear my Golani pin proudly…. Right now, I feel like I'm hiding and it feels wrong, like I've done something wrong."

"You know what a good feeling it is for me, to see that I make people feel safe when I walk around with my weapon in the train or bus station?" he says. "No one asks if I'm Arab or Jewish. They Just see a Golani soldier." And what about politics? Doesn't it get in the way? What about the Nation-State Law, and politicians like (far-rightist, anti-Arab) Itamar Ben-Gvir? "I don't let politics interfere with my service. I'm an Israeli citizen, and here in my platoon we don't care about politics. We care about the mission, and the mission is to protect Israel together."

Private A: We avoid politics, it's all about the mission (Photo: Elad Gershgoren)
"I personally don't experience racism," says A. "I'm not going to say it doesn't exist though." Do you have relatives in the Palestinian Authority? "Yes, in Hebron. They don't know about me, but I wouldn't mind if they found out, and I wouldn't care if they felt like branding me a traitor."

In a month's time, A. will finish his training, and then he plans to go home to his old neighborhood in uniform.

"Then I'll be able to say that I've made it…. I'm guarding our home here, and when a rocket is launched, it doesn’t distinguish Arab from Jew. And a terrorist who comes to stab you doesn't ask about your religion before he does so."

Illustrative: Golani troops playing soccer on a 1955 sports day (Photo: Defense Ministry)
And where do you see yourself in 10 years? "Living here, married to a Muslim woman. Even though I can also see myself with a Jewish woman. We could each keep our religion and raise our children together. I want to raise my children the same way I was raised, and teach them we are all human and have to live in peace together."