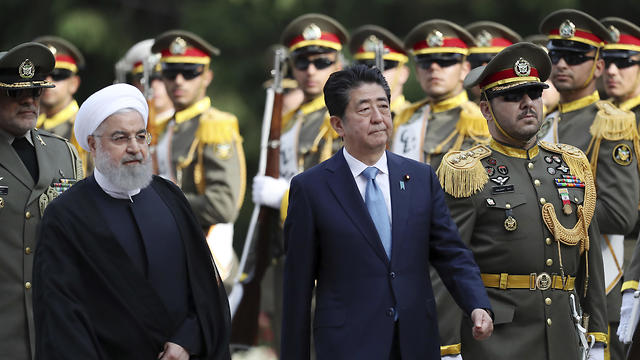 Abe, the first Japanese leader to visit Iran in 40 years, is meeting Rouhani, Khamenei; Tehran is hoping Japan can help ease tensions between itself and America

Iran will ask Japan to mediate between Tehran and Washington to ease oil sanctions imposed by the United States, Iranian officials said on Wednesday, as Japanese Prime Minister Shinzo Abe arrived in the country for a two-day visit.

Abe, the first Japanese leader to visit Iran since its 1979 Islamic Revolution, landed in Tehran as a brewing confrontation between Iran and the United States stokes fear of another military conflict in the crisis-ridden Middle East.

Shinzo Abe with Iranian President Rouhani
"Japan can help in easing the ongoing tension between Iran and America... As a goodwill gesture, America should either lift the unjust oil sanctions or extend the waivers or suspend them," a senior Iranian official told Reuters. Iranian state TV broadcast live footage of Abe's arrival, saying he will later hold talks with President Hassan Rouhani and on Thursday will meet the Islamic Republic's top authority, Supreme Leader Ayatollah Ali Khamenei. On a four-day visit to Japan last month, U.S. President Donald Trump welcomed Abe's help in dealing with Iran, highlighting what he called the "very good relationship" between Tokyo and Tehran.

Japan president visits Iran
As a U.S. ally that also has good diplomatic relations with Iran, Japan could be in a unique position to mediate between the Islamic Republic and the United States. "Mr. Abe can be a great mediator to facilitate that (easing of oil sanctions)... Japan has always respected Iran, and Mr. Abe can play a very constructive role to calm the ongoing tension that can harm the (Middle East) region," said another Iranian official, who asked not to be named. Strains between Washington and Tehran have sharply increased in recent weeks, a year after the United States abandoned a 2015 nuclear agreement between Iran and world powers to curb Tehran's nuclear program in exchange for the lifting of sanctions.

Trump cranks up pressure on Iran

Washington, calling the nuclear deal flawed and seeking to push Iran into new negotiations, intensified sanctions from the start of May, ordering all countries and firms to halt imports of Iranian oil or be banished from the global financial system.

It has also dispatched extra armed forces to the region to counter what it describes as Iranian threats. Iran threatened in May that in 60 days it would resume enrichment of uranium beyond the low fissile purity - suitable for civilian nuclear power generation - allowed under the deal, unless other powers signed up to it found a way to protect Iran's oil and banking industries from U.S. sanctions. European parties of the deal have promised to help Iran find other ways to trade, although with no success so far. All major European companies that had announced plans to invest in Iran have since called them off for fear of U.S. punishment. "Japan wants to do as much as possible towards peace and stability in the Middle East," Abe said in Tokyo ahead of his departure, according to Iranian TV. Rouhani said on Wednesday that Tehran will focus on defending its interests, according to state TV. "During the talks with foreign leaders, Iran's interests and preserving these rights will be our priority," it quoted Rouhani as saying. To achieve his aim of slashing Iran's oil exports to zero, the Trump administration has revoked waivers since May that had allowed some countries, including Japan, to continue buying Iranian crude and has effectively ordered countries to stop purchasing Iranian oil or face sanctions of their own. Despite pushing for imports to continue, Japan has stopped importing oil from Iran for now to avoid U.S. sanctions.