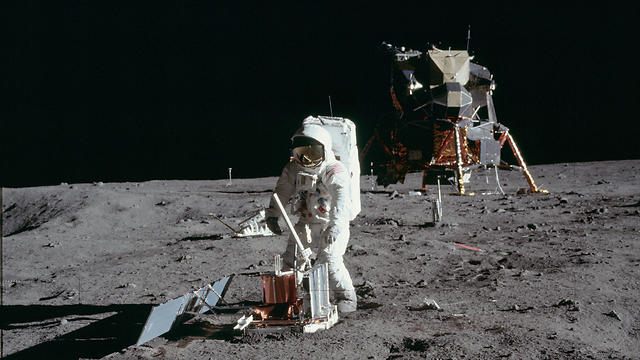 Where are Israel's moon rocks?

The Jewish state has three precious pieces of the lunar surface brought back from two separate missions, including the historic 1969 Apollo 11 landing; but when it came to dusting them off for the 50th anniversary of that first landing, no one seems to know where they are - and we are not alone

At a short ceremony on April 19, 1970,  Israel received a rare gift - two pieces of the moon brought back on the successful Apollo 11 mission to the lunar surface, which was headed by Buzz Aldrin and Neil Armstrong in July 1969.

The rocks were presented at the time to Prime Minister Golda Meir and President Zalman Shazar by U.S. Ambassador Walworth Barbour on behalf of U.S. President Richard Nixon, but when it came to dusting them off recently as part of the 50th anniversary celebrations for the moon landing, no one actually seems to know where they are.

But it’s not just the Israelis that are desperately seeking their little pieces of the moon.

Officials all across the globe - and even in the U.S. itself - are hunting for the hundreds of moon rocks handed out as gifts to to world leaders and American governors.

Of the two rocks present4ed to Israel in 1970, one was placed in container, sealed with a glass lid, and put on displayed at the Eretz Yisrael Museum in Tel Aviv.

A small Israeli flag taken into space by the American Aldrin and Armstrong was returned along with the rocks, as well as a letter from Nixon reading: "This flag of your nation was carried to the Moon and back by Apollo 11 and this fragment of the Moon's surface was brought to Earth by the crew of that first manned lunar landing.”

The second moon rock was given to Prime Minister Golda Meir.

Several years later, in July 1973, a third piece of the moon - from the Apollo 17 mission - was given to President Efraim Katzir. This was the last manned Apollo mission to the moon.

So where are Israel's moon rocks today? The Justice Ministry, which is responsible for cataloging all gifts given to the state says: “The Civil Service Law (Gifts) wasn’t enacted until 1979, therefore, gifts given to public employees were not transferred to the custodian general.”

No one in the President's Residence in Jerusalem or in any other government ministries seems to knows where the three rocks are. The United States Embassy in Jerusalem didn’t respond a request on the subject from Ynet.

The astronauts of the manned Apollo missions brought back to Earth hundreds of kilograms of moon rock for research.

Some of these rocks were given as gifts, some were stolen, some have simply disappeared, and some have been sold at public auction. The remaining rocks that are accounted for are today stored in a safe at the Lyndon B. Johnson Space Center in Houston, Texas.

Itamar Eichner and Yaron Druckman contributed to this article