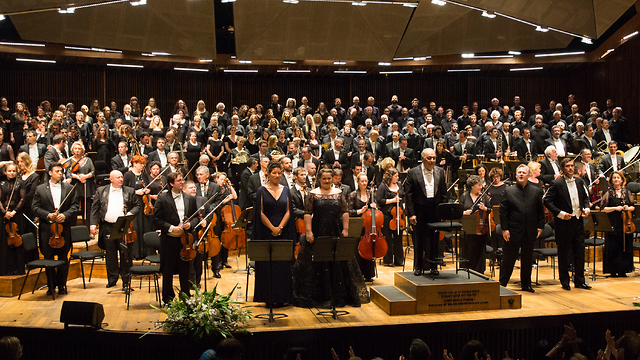 The Israel Philharmonic, four soloists and three choirs perform Verdi’s masterpiece under the baton of the retiring maestro

As Maestro Zubin Mehta prepares to step down from the music directorship of the Israel Philharmonic Orchestra this October, after 50 years on the podium, he conducted his final subscription concerts of the IPO’s 83rd season this month.

The work he chose for his farewell performances was The Messa de Requiem by Italian composer Giuseppe Verdi.

When the Maestro took the stage at the start of the concert, he was greeted by a standing ovation, which was repeated for several curtain calls at the end.

Maestro Mehta, 83, conducted the orchestra, four soloists and three choirs while seated at the podium.

The German choir’s participation was facilitated by the Goethe Institute.

Zubin Mehta conducting the Israel Philharmonic
The performance of this moving work was flawless, and the repeated chorus of the thundering Dies Irae conveyed the full terrifying power of combined voices of the three skilled choirs.

The same quartet appeared with Maestro Mehta and the IPO a few evenings later, at an emotional farewell “Concert in the Park.”

The open-air concert, which was free to the public, featured popular operatic arias.