The Mediterranean Sea on the coast of Tel Aviv-Jaffa 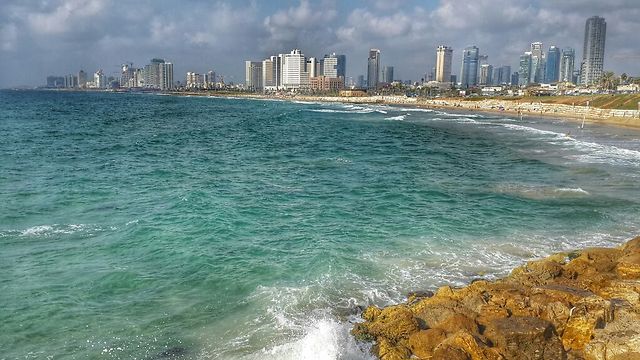 Israel is working to keep the Mediterranean Sea alive

Development in the Nile River Basin and expansion of the Suez Canal, along with overfishing and increased pollution and tourism, has led to significant decreases in marine biodiversity in the eastern Med; Israel has issued a 3rd research proposal to help shelter the surrounding ecosystems from prevalent human-induced threats

As the buffer between three continents, the Mediterranean Sea has always provided prolific economic and political relationships between Southern Europe, Western Asia, and northern Africa. In the wake of modern civilization, the Mediterranean has fallen victim to anthropogenic threats such as overfishing, pollution, coastal infrastructure construction, and political conflicts.

Although the 1995 Barcelona Convention, which calls for protecting the Mediterranean Sea from pollution, was signed by 22 surrounding countries (including Israel, Cyprus, Egypt, Lebanon, Turkey, and Syria), the eastern Mediterranean still struggles to maintain clean waters and its biodiversity.

The Mediterranean Sea on the coast of Tel Aviv-Jaffa (Photo: Asaf Magal)

Israel, located at the eastern-most end of the Mediterranean, is undergoing many of its own initiatives to protect its marine ecosystems. Recently, the Yad Hanadiv fund has partnered with the Israel Nature and Parks Authority (INPA) to provide funding for scientific research on the benefits of Marine Protected Areas (MPAs).

“The aim of the INPA is to get 20% of Israeli coastal waters protected, ideally by 2030,” says Dr. Noga Sokolover, a marine biologist at the Israel Society for Ecology and Environmental Sciences.

Before establishing MPAs, water ownership jurisdiction must be settled. Israel has three main maritime zones: coastal water, contiguous water, and exclusive economic water. The Coastal Zone reaches 12 nautical miles out into the sea and is under complete sovereignty of Israel. The Contiguous Zone reaches another dozen nautical miles outward, and largest of all, the Exclusive Economic Zone extends to the half point between Israel and Cyprus.

The environmental issue posed here is that Israel has an obligation to preserve the marine area and resources, but foreign countries have rights to sail, fly, and trade in those waters.

As seen, each of these zones has different economic and political ties, complicating the process of implementing MPAs overseen by the INPA.

Within the distinctive marine zones, different government bodies are in charge. The Ministry of Internal Affairs is responsible for the proclamation of marine reserves and has jurisdiction over the Coastal Zone.

Meanwhile, the Ministry of Economy is in charge of marine economic activity and practices its power mainly in the Contiguous and Exclusive Economic Zones. These ministries have conflicts of interest because what’s best for the economy often is not best for the environment.

While environmental advocacy has managed to urge the Israeli government to completely ban trawling in the north of Israel and put restrictions on other fishing methods, the battle to establish more MPAs continues.

A peek into the Mediterranean

The urgency to establish MPAs began decades ago. The European Environment Agency conducted studies in the 1990s that classified the Mediterranean Sea as a concentration basin. This means that evaporation exceeds precipitation, or any other water input, leaving a water deficit of 2,500 cubic kilometers every year – a trend that has only accelerated in recent years.

Future Mediterranean waters will become saltier and warmer, leading to a further decrease in biodiversity, especially along the eastern basin, where nutrient levels are already minimal.

Tourism, agriculture, and population growth have catalyzed these trends which result in eutrophication of coastal environments (the excessive loading of water bodies with nutrients, dissolved substances containing the elements P, N and Si needed by aquatic organisms for growth) and plastic pollution of coastal waters.

Out of all the major cities in the 22 countries along the Mediterranean coast, Tel Aviv is the third-largest plastic waste contributor to the sea, weighing in at about 21 kilograms of debris per kilometer.

The low biological productivity and biodiversity in the eastern Mediterranean can also be attributed to the Aswan Dam built across the Nile River.

The Aswan Dam inhibits the arrival of important limiting nutrients such as phosphorus and nitrogen from the Nile into the East Mediterranean, and drastically reduces the input of freshwater, which is crucial in maintaining salinity levels. In fact, much of the sand along Israel’s beaches originates from Egyptian dunes via the Nile.

Development on the Suez Canal has damaged natural habitats and facilitated pathways for invasive species to enter the eastern Mediterranean from the Red Sea. This has decreased local flora and fauna, which affects the marine biodiversity of the region.

According to Dr. Adi Levi, a marine ecologist and scientific director at the Israel Society for Ecology and Environmental Sciences, “Over 350 species of invasive fish, jellyfish, algae, ascidians, and mollusks have made their way into eastern Mediterranean waters through the Suez Canal.”

Furthermore, “Invasive species account for 23-44% of all fish and about 95% of all mollusks along the Achziv Marine Reserve, and South Haifa bay reefs. The invasive herbivorous fish, Marbled Spinefoot and Dusky Spinefoot (Siganus rivulatus and Siganus luridus), originate from the Indian Ocean and have dramatically changed the morphology of coastal macroalgae ecosystems.”

The geography of the Mediterranean is an issue as well. The Strait of Gibraltar is the only main access point between the Atlantic Ocean and the Mediterranean Sea. Therefore, all the nutrient-rich, and relatively cool oceanic waters have to pass through the 13-kilometer-wide, 360-meter deep strait.

Throughout this process, a significant amount of nutrient-rich water remains in the western Mediterranean basin, leaving the eastern Mediterranean ultra-oligotrophic, warmer, and saltier. Such phenomena are why the eastern basin has primary production rates three times lower than the western basin, along with only half the species diversity. These conditions enhance the sensitivity of Israeli marine ecosystems and seriously threaten marine biodiversity.

The Yad Hanadiv fund is currently issuing a third proposal for research on how MPAs could benefit the environment. Scientists will focus on specific areas along the Israeli coast from North to South, such as Evtach, Hof Hasharon, Rosh Hanikra, and Atlit.

A group of researchers and planners created the 2015 Israel Marine Plan at the Faculty of Architecture and Town Planning's Center for Urban and Regional Studies at the Technion-Israel Institute of Technology in Haifa. Its purpose was to demonstrate the need for MPAs and how to implement them.

Scientists across Israel reference this plan and use its data to further delve into understanding the benefits of MPAs.

There are only nine marine reserves in the entire aquatic space, most of which are small coastal reserves some still in their planning stages. Establishing and maintaining MPAs will help preserve marine life and ideally create an environment in which species can thrive.

Ideally, if the results of the third proposal show positive effects of implementing MPAs, Israel will move forward in establishing more protected areas.

Getting behind the movement

Public support is crucial in the grassroots movement to establish MPAs. Organizations such as the Society for the Protection of Nature in Israel (SPNI) and ANU are considerable stakeholders in garnering public support for environmental awareness.

Over the past few years, the SPNI has played a significant role prohibiting trawling in waters shallower than 40 meters, along with other commercial and recreational fishing restrictions that provide protection during mating and recruiting seasons.

The organization has an ongoing relationship with the INPA and continues to work on marine environment protection issues.

As a country, Israel will hopefully continue to connect scientists with policymakers and further delve into research done on the importance of preserving marine systems in the eastern Mediterranean.

With a third research proposal underway, many are eager to see if and how MPAs can protect and increase biodiversity and build an overall healthier environment.