Israeli children protest against the deportation of their friends
Photo: Dana Kopel 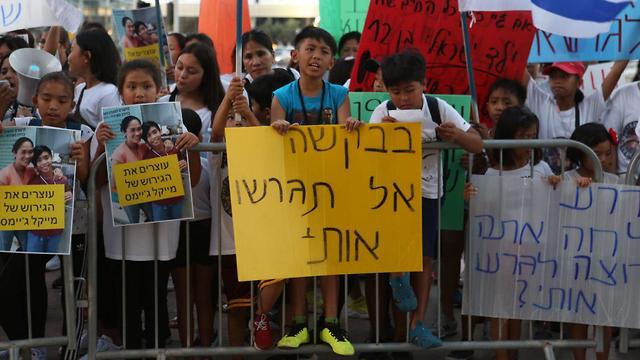 Amid a wave of public protests, the Population and Immigration Authority intends to deport at least 100 foreign workers, mainly from the Philippines, who have overstayed their work permits, along with their Israeli-born children

Amid a wave of national protests Israel’s immigration authorities on Monday expelled the first family as part of an operation intended to locate, arrest and deport illegal foreign workers and their families.

The Population and Immigration Authority intends to deport at least 100 illegal foreign workers, mostly from the Philippines, and their children who were largely born in Israel.

A Filipina carer and her 11-month-old baby - who were arrested over a week ago - were deported in the early hours of Monday morning, becoming the first ones to be flown back to their home country as part of the operation.

Children of foreign workers hold up signs asking not to be deported (Photo: Tommy Harpaz)

The woman, Jocelyn de Vera, came to Israel over 13 years ago and has recently been living in the country with an expired work permit. The Population and Immigration Authority said that following the arrest, the woman expressed a desire to return to her native Philippines with her daughter.

A representative from the Philippine Consulate in Israel visited the pair and helped issue a passport for the toddler.

This is the fourth family to be arrested since the beginning of the operation last week.

The authorities are currently focusing on families with toddler-age children in order to avoid deporting children who are ingrained in Israeli education system.

The decision was made in light of widespread protest against deporting children who were born and raised in Israel, and who in some instances don’t speak their parents' native language and aren’t familiar with their native culture.