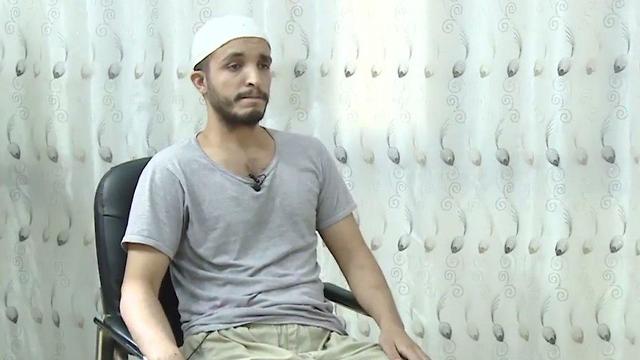 Siaf Sharif Daoud from central Israel joined the terror group in 2015, but soon realized he had made a mistake; in TV appeal in Hebrew, he seeks his parents' forgiveness for his 'mistake'

An Israeli Arab who joined Islamic State in Syria has appealed to Prime Minister Benjamin Netanyahu to return to Israel.

Siaf Sharif Daoud, a 29-year-old from Kafr Bara, a small village in central Israel, decided in 2015 to cross the border to Syria and fight with ISIS.

But in an interview released Wednesday with BBC Arabic, Siaf said he had decided to leave the terror organization and return to Israel but failed to do so.

According to Daoud, his Israeli citizenship raised suspicion among the organization members in Syria. At one point, he said, when ISIS executed a member who was suspected for working for Israel's Mossad espionage agency, his fears grew even further. After that event, he decided to try and escape to Israel, but was caught by the organization.

Daoud told the BBC that in order to save himself he married a woman and had two children with her. However, the ties with them were severed in 2018 and he does not know what happened to them since.

He is currently being held captive by the Syrian Democratic Forces, a Kurdish organization, in Al-Hasakah in northeastern Syria.

Following the interview with the BBC, United Arab Emirates TV channel Alhadath also released an interview with Daoud, in which he addressed Prime Minister Benjamin Netanyahu in Hebrew, and asked to return to Israel.

Benjamin Netanyahu embraces Gilad Shalit as he is returned from captivity in Gaza, October 2011 (Photo: GPO)

"Everyone knows what he (Netanyahu) had done for one soldier," Daoud said, referring to the return of kidnapped soldier Gilad Shalit in 2011.

"You are prime minister of a democratic state," he said. "Many countries took back their citizens from here."

Daoud also addressed his family in Hebrew, expressing his regret and asking to go home.

"Mother and Father, I am sorry I entered this world," he said. "I never thought it would be very hard. It is as if I am in a dream. I have made a mistake and I am very sorry I created a big problem for you.

In that same interview, Daoud explained why he decided to join ISIS and what made him escape.

"I was becoming more religious at the time and the publications about the caliphate attracted me," he said.

He added that the publications he was exposed to claimed that the Islamic State was a state of justice.

Asked what part Mossad played in his entrance to Syria, Daoud said that the Israeli intelligence organization had taken no part in it.

According to him, his Israeli citizenship was always a focus of interest and attention.

"In ISIS, every time anyone wanted to rat someone out, he would say that that person is Israeli – and that is it," he said.