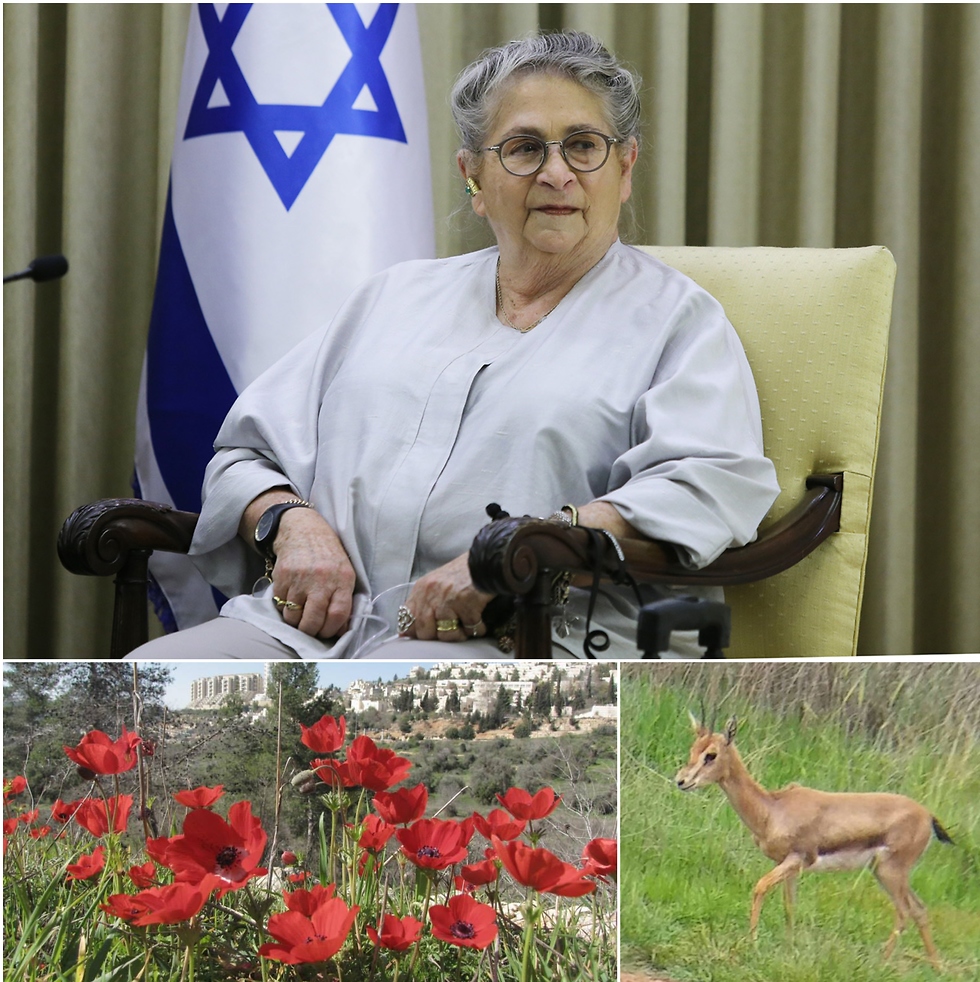 Wife of President Rivlin was one of the people who campaigned to save Gazelle Valley from becoming another Jerusalem neighborhood, making its four-legged residents extinct

Jerusalem's Gazelle Valley has lost its most famous resident, Nechama, named after the late wife of President Reuven Rivlin, on the 30-day anniversary of the first lady's death.

Nechama Rivlin was a major supporter of the Gazelle Valley urban reserve for many years and was one of the first people to realize its potential.

Gazelle Valley was home to 33 gazelles who lived between apple orchards that grew in the area.

In 1993, when a central highway was built nearby, the valley became surrounded by the city and roads, and as the years passed the gazelle population declined; the animals were either run over or preyed on by dogs and jackals.

The entire valley almost became history when a new neighborhood was planned to be built there. Luckily for the gazelles, local residents fought for it to remain an open space for the welfare of all of the city's inahbitants and the gazelles themselves.

The Society for the Protection of Nature in Israel and other environmental NGOs joined the struggle for Gazelle Valley, as did Nechama Rivlin. Finally, in 2008, the construction plan was canceled and a new plan for an urban park was initiated.

When the park opened in 2015, the name Nechama was officially given to one of the gazelles as a token of appreciation to the work of Nechama Rivlin and her efforts to encourage nature preservation in the city.

The firt lady used to get updates about the valley's gazelle population, including her namesake, and kept the entire family updated. Every now and then, the first lady took her grandchildren to the valley to visit the gazelles.

In June, just a few days after the death of Nechama Rivlin, the park team started noticing that Gazelle Nechama looked weak. After a few weeks of fast deterioration, the gazelle died of heart failure.

A few weeks ago, the Rivlin family arrived in the park and was saddened to hear that gazelle Nechama had passed away, knowing how dear she was to their mother and grandmother.

After the gazelle died, the park team realized that she had passed away on the 30-day memorial for Nechama Rivlin.

The famous gazelle left an impressive lineage behind here; she had seven offspring, and her great-grandchildren make up a distinguished part of the park herd.

Yael Hammerman Solar, an urban planner who manages Gazelle Valley for the SPNA, says that the team's park saw Nechama Rivlin as an inspiration, especially her desire to help children with special needs.

"When we work with populations that have special needs, we often hear them say amazing things like, 'gazelles would never make fun of me or harm me,' and 'when I give love to nature, nature loves me back," she said/

Gazelle Valley Park is open seven days a week, free of charge, so that everyone can enjoy Jerusalem's lush mountainous environment, and gazelles can keep claiming their spot as honorary Jerusalemites.