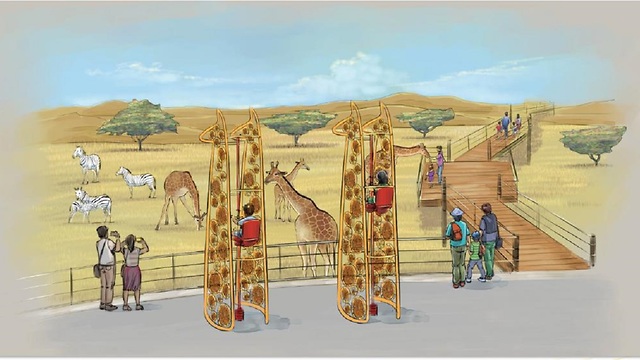 Citing concerns for animal welfare, the municipality of the Negev's capital says it will develop 'experiential animal sustainability center' by 2022 in order to teach the public to empathize with the environment and living creatures

The southern city of Be’er Sheva has decided to dismantle its local zoo, which the municipality says has outdated standards of animal welfare, and in its place erect an extensive savannah for the animals, without cages and without bars.

The savannah, or as the local authorities call it “the experiential animal sustainability center” is scheduled to open sometime in 2022 and will take up some 120 acres of land - far smaller than the Ramat Gan Safari's approximate 1,000 acres.

Most of the animals to occupy the ecosystem will have been brought from the existing Negev Zoo and include crocodiles, snakes, zebras, foxes, lions and meerkats.

The animals will be allowed to roam free without having to be contained by steel bars and cages.

The place will strive to allow visitors to experience the experimental center from up close. For instance, giraffe-shaped facilities will be put up in an area allocated for giraffes.

"The visit to the center will be active and not passive,” says Ziv Reshef, who currently manages the Negev Zoo and who will head the new center.

“You will not come and just see tigers, giraffes or crocodiles - you will learn about them too.

“We’ve developed something unique, an educational institution that’s one of a kind in the world,” says Reshef.

“Its purpose is to actually educate the public about how they can become partners in protecting and preserving wildlife, through learning about the animals at the center."

Be’er Sheva Municipality says the center's goal is to increase human empathy for the environment and living creatures.

"The venture was born because of a new worldview where the story of a zoo is passé,” says Be'er Sheva Mayor Ruvik Danilovich. “There’s no reason to keep animals in cages.”

The establishment of the center is made possible with the help of Mandel Center for Leadership in the Negev, which donated $20 million to the project.