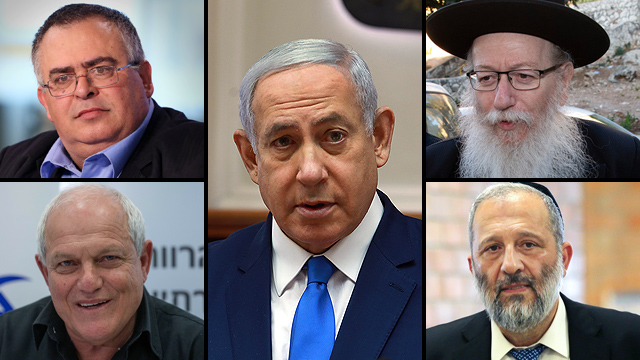 Netanyahu is fighting for his personal life, not his political survival

Opinion: The prime minister should not be dragging down the state institutions responsible for potentially bringing him to justice for his alleged crimes and endangering the democracy for which Israel has earned international respect

Welfare Minister Haim Katz has just joined a long list of public figures whom law enforcement, police, prosecutors and attorneys have recommended be prosecuted for suspected crimes in the field of what we call public corruption.

Katz, unlike Prime Minister Benjamin Netanyahu, did not quarrel with those responsible for investigating the suspicions against him. He called for a hearing with Attorney General Avichai Mandelblit and managed to evade a police recommendation to indict him for bribery as well.

In other words, he followed the system. Amid all the unpleasantness, he acted as one would expect any one of us and certainly from someone who decided to devote his life to public service.

It is not a heartwarming sight to see the growing number of senior political officials are knee-deep in suspicions. Foremost, of course, is the prime minister, who is currently preparing for a series of hearings on the looming indictments he has received from Mandelblit.

And after Netanyahu comes Interior Minister Aryeh Deri (Shas), who may go back to prison if he fails to clear his name of all the suspicions against him, and Deputy Health Minister Yaakov Litzman (United Torah Judaism), whom the police, we learned this week, have recommended be indicted. And then there's Likud MK David Bitan, who the police have recommended by indicted for bribery.

The conclusion that we can come to from the decision by Haim Katz's lawyers, is that we, with all the criticism directed at the various authorities, do not trump up charges.

Alongside the great power we give to elected officials for the transparent distribution of money for causes that should be enjoyed by us all, there is an expectation that those in power keep their hands clean and understand that they are acting under the watchful eye of both recipients of these services and the media.

But with his reaction to the attorney general's decisions in his case, Netanyahu is trying to dismantle the very institutions that are supposed to ensure that we do not descend into anarchy.

Ironically, Israeli democracy is highly rated by our Arab neighbors as well as by many European countries, perhaps because of the unfortunate fact that an Israeli president, prime minister, finance minister and Shas leader have been jailed for extended periods of time for criminal behavior proven through the legal process.

I honestly hope that Netanyahu does convince the authorities that his place is not in prison. But he should also be expected to set an example and stop accusing those authorities of harassing him for no real reason.

I'm just guessing that Netanyahu is fighting for his personal life, not just trying to win a fifth term in office.

He knows, and we have indeed seen it in the past, that from the moment recommendations to indict are handed down, the path to prison or the end of one's political life is a very short one indeed.