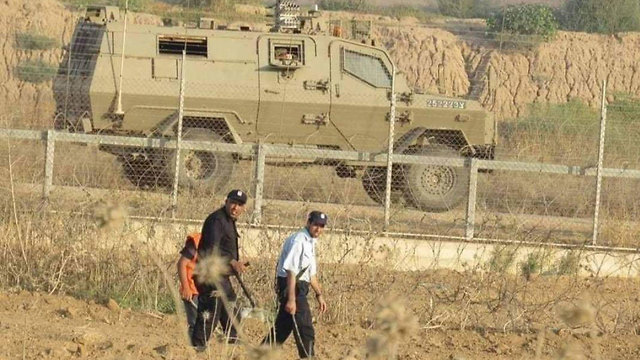 An armed Palestinian was shot Thursday night by Israel Defense Forces troops as he approached the Gaza perimeter fence near Kibbutz Nahal Oz.

The IDF force that arrived at the scene stopped the armed man before he managed to cross the fence.

There were no casualties on the Israeli side.

Palestinian media reported that a bystander in the border area of the eastern Gaza Strip was shot and wounded by IDF troops, but did not elaborate further.

Earlier Thursday, the IDF issued an unusual statement that deflected Hamas responsibility for recent rocket launches from Gaza, and instead placed it on the Palestinian Islamic Jihad (PIJ).

An IDF statement published in Arabic said: "The Gaza Strip is in the middle of a process that will significantly improve civilian life (there) in the near and distant future.

"The PIJ terrorist organization is working to undermine, disrupt and harm these understandings," the IDF said. "The PIJ has carried out and plans to carry out attacks, including rocket fire. Israel cannot and will not accept such attacks.

"The consequences of the failure to carry out the steps planned for the Gaza Strip are the responsibility of the PIJ. It is incumbent on Hamas, as the regime in the Gaza Strip, to exert control over the PIJ and stop these attacks."

The incident Thursday comes amid growing tensions around the Gaza Strip.

A rocket was fired from the Gaza Strip into Israeli territory on Wednesday night, hitting an open area close to one of the communities in Sde Negev Regional Council. There were no injuries and no damage.

Following the attack, the Israel Air Force struck a Hamas naval base in the northern Gaza Strip.

Another launch from Gaza towards Israeli border communities was detected shortly after the IAF strike. There were no casualties and no damage.

In the meantime, the Qatari envoy is scheduled to enter the Gaza Strip in the coming days with the country's monthly financial assistance for needy Gaza residents as well as diesel to operate the Gaza power plant.