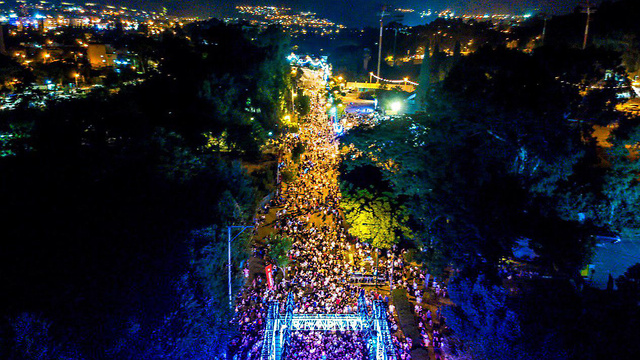 'Nasrallah is the one who should be scared,' say mayor of Kiryat Shmona, which took its share of rocket fire during the 2006 Second Lebanon War; local security officer laments lack of government funding to reinforce bomb shelters

Despite the growing security tensions in the north, thousands turned out Wednesday for the 70th anniversary celebrations for Kiryat Shmona, the small city on the Lebanese border that bears the scars of multiple rocket attacks.

The central Hayarden Street was turned into a thoroughfare, and the city's park hosted a huge event that included a concert by X Factor winner and city native Eden Ben Zaken.

"Making sure her concert went without a hitch was the only stress we felt around here," said the city's mayor Avichai Stern.

"We don’t feel any security pressures here," he said. "I think there's a bit of a confusion, (Hezbollah leader Hassan) Nasrallah is the one who should be scared. This area is always on the verge of blowing up, but if we let that affect us we wouldn't be able to live normally, let alone celebrate anything."

He added, however, that the event had been fully coordinated with the security forces. "If there were any substantial fear of something happening, I don’t believe the security forces would approve having such a public event outside," Stern said.

The vigilance in the north is also present in Kiryat Shmona, which took a significant amount of rocket fire during the 2006 Second Lebanon War between Israel and Hezbollah.

Locals report more IDF vehicles on the roads, police stand ready to close roads near the border and the occasional buzz of drones can be heard overhead - but this state of readiness does not really drip into the everyday lives of the people of the Golan Heights and Upper Galilee.

The heightened alert is in response to an IDF airstrike on the outskirts of the Syrian capital and an alleged Israeli drone attack on a Hezbollah communications center in Beirut, as well as the threats made by Hezbollah in response. There was also evidence of brewing tensions on the other side of the border when Lebanese soldiers shot at IDF drones on Wednesday.

Many of the visitors to Kiryat Shmona share the positivity and optimism of the locals, as they visit natural sites and tourist attractions on the last week of the schools' summer vacation.

One such visitor was Avi Einhorn from Beit Shemesh in central Israel, who said that he and his family were deliberately avoiding the news while on holiday.

"We arrived here on Sunday, and the first thing we did was shut off the radio," he said. "We don’t have any idea what this is all about. We'll be home on Friday and then we'll catch up on recent events. In the meantime we are hiking and having fun. I'm sure if there was any real threat the army would tell us to evacuate."

Local bike shop owner Assaf Deutch says recent events have not had any effect on the number of visitors, and estmiates that there are some 15-20% more visitors than last summer.

The main issue, he says, is the summer heat and not Nasrallah.

Few of the visitors to the area have been traveling and camping, trusting that the security forces will protect them from any attacks.

We have "God and the IDF to watch over us," says one tourist.

The local authorities are updated by the IDF about situational readiness, and the directions are clear: keep up your normal routine.

The local council's security officer Asaf Langleben says that the regional authority is always prepared to quickly shift from a daily routine to emergency footing.

"This week was very good to us tourism-wise," he says. "Current events will have no effect on the opening of the academic year in any way. We're all practiced and ready, and at the start of the new school year we'll go over security readiness and so on."

What does frustrate Langleben, however, is the indefinite delay of the NIS 5 billion the government was supposed to deliver to the local councils in order to reinforce local shelters and protect its citizens.

"We don't even have the 15 seconds those communities surrounding the Gaza Strip have," he says. "If you don't have a shelter at home, you're basically totally unprotected. The only thing you can do in that situation is lay flat on the floor."