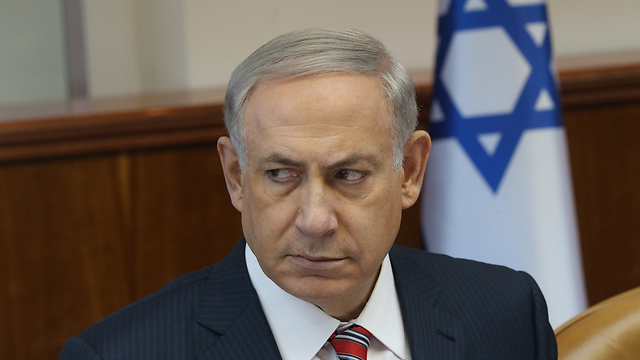 Netanyahu under fire after urging boycott of Israeli TV channel

Prime Minister Benjamin Netanyahu came under fire Sunday for his attacks on an Israeli television channel that aired a controversial HBO show about the events of summer 2014, when three Israeli teens were kidnapped and murdered by members of the Hamas terror group and three settlers kidnapped, tortured and murdered a Palestinian teen in retaliation.

Netanyahu took aim at Channel 12 for airing "Our Boys" in a Facebook post Friday evening, calling it a "propaganda channel" and "anti-Semitic," and calling on Israelis to boycott the network.

"The Keshet (Channel 12) propaganda channel has created an anti-Semitic series called 'Our Boys,' which is distributed world-wide and smears the good name of the State of Israel," Netanyahu wrote in his post.

"I am not surprised by Channel 12 smearing Israel's good name with lies, since I'm used to them smearing my name daily. The show "Our Boys" devotes only a few minutes of cold archive footage to the murder of the three boys.

"Immediately thereafter and throughout the entire series, the whole plot detaches itself from their shocking murder story and focuses on one case - the murder of the Arab boy in Jerusalem, a shocking but rare case.

"Since the series aired last month, many of you have contacted me and asked what could be done. I made a clear recommendation: Don't watch Channel 12. They benefit from ratings".

A still from the HBO show 'Our Boys' (Photo: Ran Mendelson)

The prime minister faced widespread backlash online, with social media users berating him for his accusations, even liking him to the pro-Palestinian BDS movement, which calls for the boycott of Israel.

One Twitter user wrote: "This is it folks: Netanyahu has endorsed BDS. He wants no one to watch the Israeli HBO series Our Boys." The writer went on to quote from Netanyahu's Facebook post: "This is the real answer in a democracy, the freedom to choose what to watch".

This is it folks: Netanyahu has endorsed BDS. He wants no one to watch the Israeli HBO series Our Boys.
According to Bibi: "This is the real answer in a democracy, the freedom to choose what to watch."

Another user took problem with the use of the term anti-Semitic: "Do we now just call anything we don't like anti-Semitic?! This is CRAZY, and so irresponsible and sadly not really a departure from the new normal."

!! Do we now just call anything we don't like anti-Semitic?! This is CRAZY, and so irresponsible and sadly not really a departure from the new normal.
HBO's 'Our Boys' is 'anti-Semitic,' Netanyahu says, calls to boycott Israeli producers https://t.co/25wncQpB46

"Do not believe in incitement, in denial," Rivlin said, according to the Jerusalem Post. "Do not listen to the voices which are eager to radicalize the discourse, right or left. Take responsibility for our 'unity' because only this 'unity' is the guarantee of our strength and is the best guarantee of our security."

Netanyahu's criticism came a week after Channel 12 published transcripts from a state witness in one of the criminal investigations into the prime minister, known as Case 4000, in which he is accused of bribery, fraud and breach of trust for allegedly promoting regulations worth hundreds of millions of dollars to Bezeq and its then-majority shareholder Shaul Elovitch. In return, the prime minister allegedly received favorable coverage on Walla! News, which is owned by Bezeq.

The Likud party appealed to the Central Elections Committee to prevent media outlets from publishing transcripts from Netanyahu's investigations, but Supreme Court Justice Neal Hendel, the interim head of the committee, rejected the request until a hearing is held this week.

Netanyahu also took aim at Channel 12 in a live stream on his Facebook page Saturday evening, mocking a Yedioth Ahronoth report from that the channel's legal correspondent Guy Peleg had been assigned a bodyguard due to threats he received after publishing the transcripts from the witness, former director general of the Communications Ministry Shlomo Filber.

"They should be ashamed of themselves and the poor (Israeli billionaires) Drorit Wertheim and Yitzhak Tshuva supporting them.

"Stop with the lies with the fake bodyguards you hired for your reporter. You probably hired (Blue and White leader and main opposition contender) Benny Gantz's fake bodyguard".