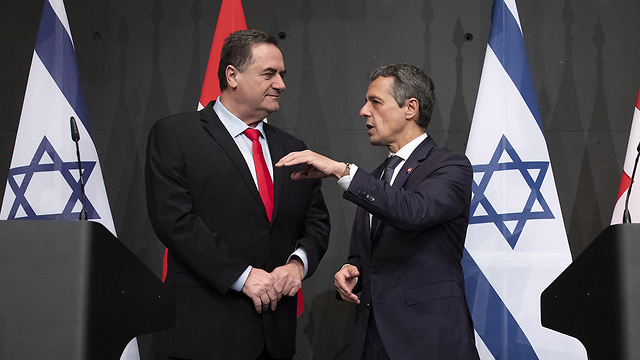 Foreign Minister Yisrael Katz emabrked on an official visit to Switzerland on Monday accompanied by a legal team in an effort to find a solution to existing Swiss legislation that allows Israeli political and military officials to be arrested and interrogated for alleged war crimes.

Katz held talks with his counterpart Ignazio Cassis in Lucerne and was to meet President Ueli Maurer on Tuesday. Katz was to clarify that the State of Israel will not tolerate any form of denial of its right to self-defense against radical Islamist terror threats or threats to prosecute past or present Israeli leaders and military personnel.

Katz's visit also brings together senior Israeli jurists with their counterparts in Switzerland to find a suitable solution to the problematic legislation and to ensure Israeli representatives could visit the country peacefully.

Former prime minister Ehud Olmert canceled a planned visit to Switzerland last month after he was notified that he is liable to be arrested in the Alpine country for alleged war crimes.

The trip was canceled after the Foreign Ministry and the Justice Ministry received a statement from the Swiss authorities saying that Olmert would be taken in for questioning on suspicion of war crimes committed during the 2008 IDF campaign in Gaza, during which he served as prime minister.

Olmert initially insisted on traveling normally, but after consultations between the Justice and Foreign Ministries, it was decided that he should stay in Israel.

A similar war crime complaint was submitted against former foreign minister Tzipi Livni. The complaint was filed by a pro-Palestinian group after Livni's 2017 visit to the country.

However, this complaint did not stop Livni from visiting Switzerland again and even participating in this year's World Economic Forum in Davos.