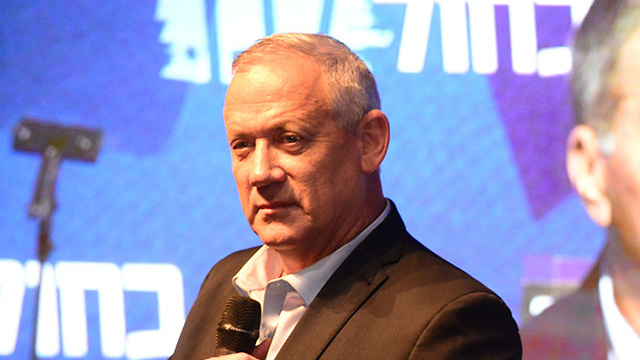 In shift, Gantz touts liberal secular coalition with him at its head

Blue and White leader tells supporters that his unity government would not include small sectorial parties who have 'extorted' earlier prime ministers, likely referring to ultra-Orthodox politicians whom he has previously criticized

Blue and White leader Benny Gantz told supporters he will form a liberal secular coalition after the September 17 elections for the Knesset.

In a shift in policy, Gantz is no longer suggesting that ultra-Orthodox parties will be invited to join his new government should he be tasked with forming the next coalition after the elections.

In a campaign event in Be'er Sheva, Gantz said his unity government would not include small sectorial parties who have "extorted" earlier coalitions.

"The elections system in Israel has caused situations whereby small parties are able to force their policies on the majority of Israelis," Gantz said, adding that past prime ministers have been forced to give in to the demands of such parties.

While Gantz refrained from mentioning any parties by name, it is likely that he was referring to the ultra-Orthodox parties that he has previously accused of having coerced Prime Minister Benjamin Netanyahu into giving in to their legislative and financial demands.

Blue and White Party officials said they are hoping to form a liberal, Zionist government that will represent the secular majority and will not be extorted by the extreme right or the ultra-Orthodox.

"Our guidelines will be clear, and anyone wanting to join our coalition based on these guidelines, is welcome," a party official said.

Sources in the party said the leadership realized that the ultra-Orthodox parties will remain loyal to Netanyahu and therefore a decision was made to adopt a more secular agenda.

Blue and White is in favor of civil marriage (which is not available in Israel as the ultra-Orthodox control all aspects of religious Jewish life), ensuring businesses are able to operate on Shabbat and an egalitarian conscription law.

The sources said that yielding any ultra-Orthodox demands would likely lead to the dissolution of their party as one of its three factions, Yesh Atid, used its previous membership in government to legislate against ultra-Orthodox interests.