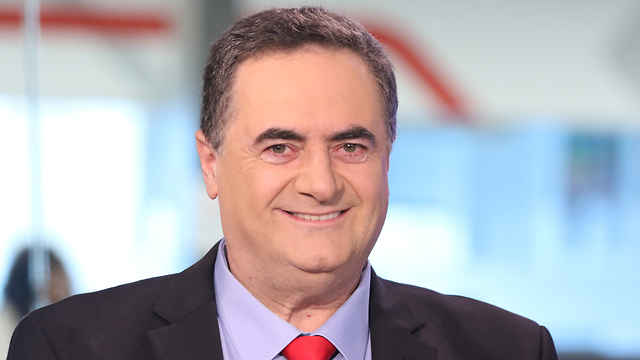 Israel Katz claims there's no chance for Netanyahu to be replaced as Likud leader in a 'democratic way' and lends his support for U.S.-Israel defense alliance in a fight against Iranian missile enterprise and nuclear ambitions

The foreign minister on Thursday said the ultra-Orthodox will not “extort” the ruling Likud party into turning the country into a halachic state.

“They can extort the left, not us,” said Israel Katz in an interview with Ynet. “Haredim can’t extort the Likud party. The prime minister said there won’t be a halachic state … our position on this is clear and they (the ultra-Orthodox) should come to us with that in mind.”

Katz went on to say the ultra-Orthodox demanded Prime Minister Benjamin Netanyahu fire him from when his previous post as transportation minister after he refused to shut down construction work on railroads on weekends.

"I was threatened with dismissal because essential railroad work was being done on weekends. The Likud manages the state responsibly," he said.

The 63-year-old then said he supports forming a U.S.-Israel defense alliance on the threat of Iranian long-range missiles as well as their nuclear ambitions.

“We’ve got the means to attack and defend, but the alliance will prevent us from having to permanently allocate huge resources to counter those threats,” he said. “In this sense, American presence in the region will certainly complement the capabilities Israel already has."

There are, however, some in the defense establishment who oppose such an alliance, claiming it would restrict the IDF by requiring it notifies the U.S. ahead of any action in the region.

Netanyahu is expected to bring up this issue during a meeting with U.S. Defense Secretary Mark Esper in London sometime on Thursday.

"I am convinced that they will talk about this because the prime minister is taking with him the air force chief as well as the head of operations unit," Katz said. "Everything that happens in that area between Syria, Lebanon and Iraq ... I support a US-Israel defense alliance on specific issues."

Katz also said he doesn’t know who Yisrael Beytenu Chairman Avigdor Liberman was referring to when he suggested some Likud officials want to see Netanyahu out as the leader of Likud. “Maybe he’s making it up, maybe he’s referring to himself because he was once a senior Likud official once,” said Katz.

“There is no chance for someone to replace Netanyahu in a democratic way … we have the most popular prime minister with 40% approval rating, he manages the country’s security, politics and financed, and there’s no need for this spin.”