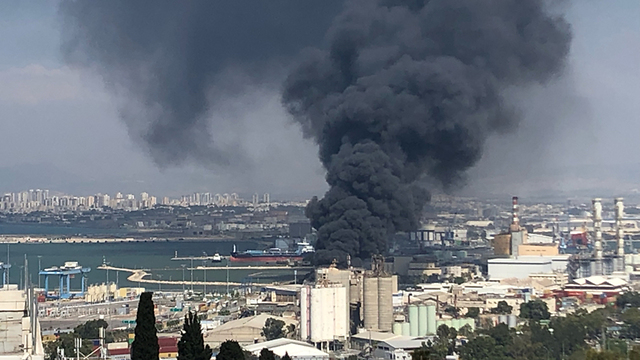 Northern city engulfed in heavy smoke as some 18 firefighting teams dispatched to area of warehouse holding 80 tons of oil to douse flames, prevent fire from spreading to nearby facilities

Six hours after a massive fire broke out at Haifa Port oil warehouse on Thursday, it came under control and traffic blockages ended in the area.

The warehouse, located within an oil manufacturing factory, is believed to contain some 80 tonnes of oil.

At least 18 firefghting crews from the Haifa region as well as other parts of the country operated in the area in order to gain control of the flames.

One fire-fighter was lightly injured when he sustained a burn on his leg. He was evacuated to a hospital.

Large containers of sunflower and olive oil are stored in the warehouse ahead of distillation and bottling.

The fire crews were operating throughout the plant in order to beat back the flames. Authorities said that efforts to douse the blazes would likely continue well into the evening hours.