Images taken after the airstrike on a facility on Syria's border with Iraq
Photo: ImageSat International 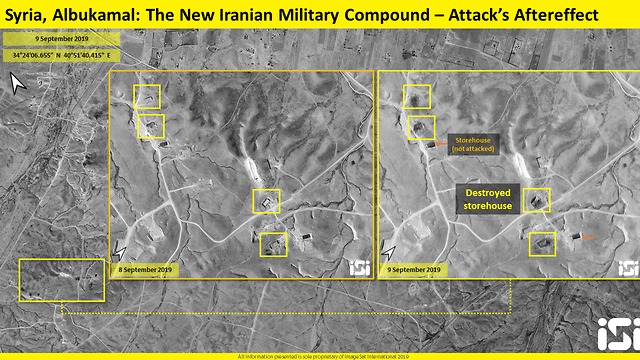 Compared to images of the same compound taken a day earlier, the photos show that the four depots - suspected of housing a delivery of precision missiles - were carefully selected as targets, with other facilities nearby untouched

According to foreign news reports, the Israel Air Force attacked the site, which holds an expansive military complex, several times in recent years.

Images taken after the airstrike on a facility on Syria's border with Iraq (Photo: ImageSat International )

Compared to images of the same compound taken a day earlier, the satellite photos show the warehouses - suspected of housing a delivery of precision missiles - were carefully selected as targets.

Nearby warehouses were not attacked and remained intact after the strike.

Syrian opposition activists on Monday said at least 18 people were killed in the aerial attack, which targeting pro-Iranian militias in the town of Al Bukamal in eastern Syria.

Footage of the airstrike on the Syria-Iraq border

The Britain-based Syrian Observatory for Human Rights said the attacks began late Sunday and continued after midnight. Three explosions were heard in the area.

Two local activist collectives in eastern Syria - the Euphrates Post and the Sound and Pictures - also reported the airstrikes in Boukamal, without giving a death toll.

An image of the overnight strike on the Syria-Iraq border

Hours after the air strikes, the Israel Defense Forces said pro-Iranian militias in Syria made a failed attempt to launch missiles into Israeli territory.

"The rocket fire was carried out by Shiite militias led by The Quds Force (an elite unit in the Iranian Revolutionary Guard that operates outside Iranian territory) from Syrian territory on the outskirts of Damascus,” said the IDF Spokesperson’s Unit.

“The IDF holds the Syrian regime responsible for any action taking place on its territory."

Last week, Fox News reported that Tehran had established its largest military base in Syria to date, located near the area attacked by unknown warplanes overnight.

According to the report, Iran was in the process of moving thousands of troops into the facility.