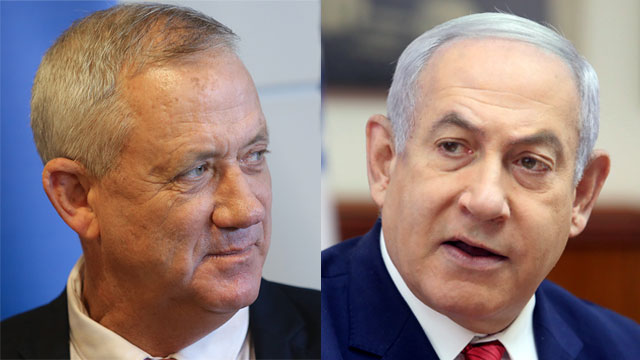 Netanyahu's party inches over its closest rival in latest poll

According to a poll conducted by HOT media company, the ruling Likud would receive 33 Knesset seats over Blue and White party's 32, while the Joint List - political alliance of the main Arab-dominated parties - would be the third most dominant faction with 10 seats

Prime Minister Benjamin Netanyahu’s Likud appears to have gained a slight edge over its main rival the Blue and White party ahead of the September 17 elections, according to the latest poll conducted by HOT media company.

The poll, released on Tuesday, shows the ruling Likud leading with 33 potential Knesset seats over Blue and White’s 32.

The survey reveals if the next week’s elections were to be held today, the Joint List - a political alliance of the main Arab-dominated political parties in Israel - would get 10 seats, Avigdor Liberman’s Yisrael Beytenu would get 9 seats.

Ayelet Shaked’s Yamina party, formerly known as United Right, would get 7 seats, the ultra-Orthodox United Torah Judaism party would also get 7 seats, which is on par with its Sephardic counterpart Shas.

The Democratic Union - an amalgam of the left-wing Meretz party, Ehud Barak's Israel Democratic Party and Labor defector Stav Shaffir - would get 6 seats, the Labor-Gesher union would receive 5 seats and Otzma Yehudit (Jewish Power) appears to barely inch over the electoral threshold with 4 potential seats.

The survey was conducted among 3,636 HOT subscribers with a representative sample of the overall Israeli population aged 18 and over. The maximum sampling error in the survey is -+1.6%.