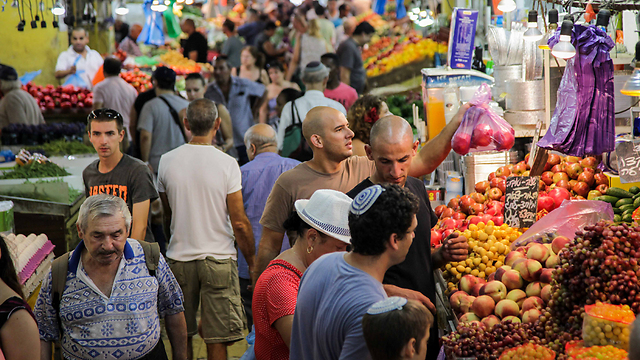 In research that could change how we view lifestyle and tradition, multidisciplinary collaboration of scientists from around country shows that while Jewish women feel calm in quiet neighborhoods, Muslim women tend to be more relaxed in bustling city centers

Today’s life in urban areas is fraught with a lot of health risks, including air pollution, noise, and heat stress. The latter occurs when ambient temperatures rise to a level where the body becomes unable to withstand or adapt to the temperature changes.

Heat stress increases significantly in many cities as a result of the urban heat island effect.

At the same time, staying and living closer to natural environments has a positive impact on one’s health. Even short visits to small urban parks or public green spaces are effective ways to boost physical and mental well-being.

In recent years, studies have examined the variety of health risks that different ethnic groups are exposed to in urban environments compared to natural environments.

Most of the studies in question were conducted in the United States and compared groups of African Americans, Americans of European descent, and Latinos.

Some of the studies show that in urban areas, Latinos and African Americans are more exposed to health risks and feelings of stress.

Scientists have not yet been able to establish concrete reasons for these disparities. However, they have come up with a variety of hypotheses that will be tested in upcoming studies.

These hypotheses revolve around the discrimination of different groups in terms of their traditional clothing, dietary restrictions, and genetic differences.

Now, a multidisciplinary research study has compared Jewish and Muslim women in Israel by examining their responses to environmental variables in the urban environment such as air pollution, noise, and heat stress.

The findings indicate the occurrence of different environmental effects on each population, as well as distinct coping mechanisms the groups have developed.

Afula and Nazareth as a research laboratory

The research, presented at the annual conference for science and the environment, is the result of a multidisciplinary collaboration of scientists from different universities in Israel: Prof. Yitzhak Schnell and PhD student Diana Saadi of the Department of Geography and Human Environment at Tel Aviv University; Prof. Emanuel Tirosh of the Rappaport Family Faculty of Medicine at the Technion and Bnai Zion Medical Center; and Dr. Agai-Shai from the Department of Epidemiology from the Azrieli Faculty of Medicine at Bar-Ilan University.

The scientists examined 72 healthy young women between 20 and 35 years old - 48 of which were Muslim and 24 Jewish. All test participants were non-smokers and did not take any daily medications.

The survey was conducted in the cities of Nazareth and Afula, which are located 12 km away from each other in the northern periphery of Israel. Both cities are similar in topography and climate.

The northern city of Nazareth (Photo: Shutterstock)
The study included field trials consisting of 12 individual sessions that were spread evenly over a period of six months. For each session, six women of the same ethnic group took part in the experiment in their city of residence. Sessions lasted for about two and a half hours, during which the women visited three different types of environments: a crowded urban center with pedestrians and car traffic, a quiet residential neighborhood with only three to five stores, and different city park similar in size. The women spent about 30 minutes in each environment.

Each woman wore a device on her wrist that measured her heart rate for the duration of the session.

At the same time the scientists measured the level of air pollution, noise, and thermal load at each station, while inquiring about the women’s overall feeling of comfort.

"During the experiment, we examined the effects of the different environments on heart rate variability, which is an indicator for changes in the autonomic nervous system," says Prof. Isaac Schnell of Tel Aviv University.

The autonomic nervous system is linked to the internal organs and to daily bodily functions that occur unconsciously, such as heart, digestive and respiratory activities.

"This system has two parts," says Schnell. “The parasympathetic nervous system monitors the internal organs, preserves energy, slows the heart rate and takes care of the day-to-day functions of the body. This also includes bowel activity. The sympathetic system, on the other hand, comes into play in stressful situations, during an injury or sudden mental stress. In such situations, the sympathetic system causes changes in the body and the heart rate increases."

According to the study’s results, Jewish and Muslim women respond differently to their respective environments. Jewish women who participated in the study suffered from stress in noisy and polluted urban environments, but relaxed in quieter areas. Muslim women, however, experienced the opposite. The feeling of stress intensified when they were alone in a quiet residential neighborhood, and they relaxed in the bustling city center. “It is hard to determine the central reason for this,” Schnell says, “but we hypothesize that Muslim women felt safer downtown while Jewish women suffered more from noise, air pollution, and heat stress in the busy urban centers. The difference in response seems to be cultural as well."

The unspoiled beauty of Habonim beach nature reserve (Photo: Rinat Russo)
Moreover, it was found that the general level of stress among Muslim women was lower than that in Jewish women, except in the home environment, where the stress level of Muslim women increased relative to that of Jewish women. The researchers link this rise in tension to "parental stress," as the Muslim women who participated in the study had more children.

Schnell says: "The most interesting finding of the study, which is also the first of its kind, and therefore needs to be treated with caution, is the connection between the activity of the sympathetic and parasympathetic system in the autonomic nervous system found in the Muslim women who were tested.

"This demonstrates the effectiveness of a person’s ability to adapt to a specific environment."

In Jewish women, however, no such relationship was found. In other words, it seemed as though within the Muslim women tested, there was a physiological mechanism to deal with the busy city environment, whereas for Jewish women, this mechanism was less developed.

Therefore, the autonomic nervous system was very active in Muslim women while dealing with environmental changes. However, it is important to note that the results are preliminary and should be explored in more depth.

The results also reinforce what is known so far about the mental impact of nature. “Urban parks and green environments have an extraordinary relaxing effect. We have seen that even a short visit to the neighborhood park greatly reduces the level of stress among the two ethnic groups,” Schnell concludes. Courtesy of ZAVIT* – Science and Environment News Agency