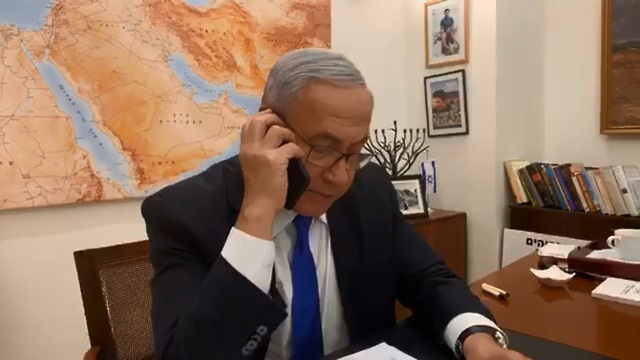 PM slams the social network's actions as 'unjust' and 'disproportional' after it suspends the bot connected to Netanyahu's account for the second time within days; meanwhile Netanyahu takes to social media, warning of high voter turnout among Israel's Arabs

Facebook has penalized a chatbot on the page of Prime Minister Benjamin Netanyahu Tuesday after it violated a law prohibiting the publication of public opinion polls in the days leading up to an election.

Facebook said in a statement it had suspended the bot "for violating local law" until polling stations close later in the day.

In a video posted to Facebook, Netanyahu called the step "disproportional" and "unjust," claiming his Likud party was being targeted by the country's election commission.

It was the second time in less than a week that Facebook has taken action against Netanyahu's page, which uses an automated chat function to communicate with followers. Last week it was over a violation of the social network's hate speech policy.

In the meantime, Netanyahu has taken to his social media, warning of high voter turnout among Israel's Arab population in a bid to shore up hardliner right-wing votes, similarly to his comments during the 2015 elections, when he controversially claimed that "Arabs are going to the polls in droves".

Some in the Arab community have called out for voters to show up at the polling stations in a bid to raise voter turnout in the Arab sector, claiming Netanyahu is trying to paint a fallacious picture.

According to them, Netanyahu's claims that voter turnout in Arab communities is higher than usual, is a deliberate attempt to make the community members complacent. "This time everyone needs to vote and not be complacent," said Amin Haj Yhya, an Arab voter from Taibeh.

Mohamad Jabaly, also from Taibeh, said he encouraged people to go and vote as well.

"I arrived at the polling station early in the morning and voted and continued to campaign in order to convince people who didn't want to vote to come vote and make a change" said Jabaly.