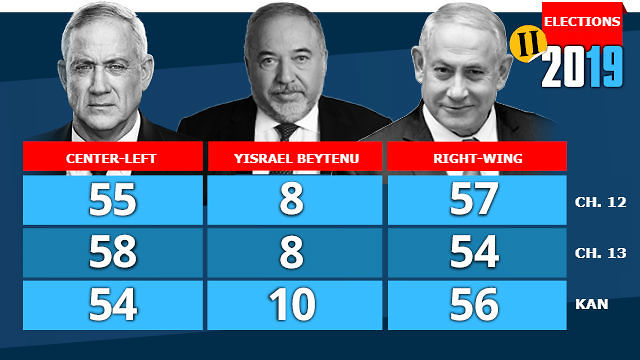 All three main television channels predict that neither center-left nor right-wing bloc has enough seats to form a new government, leaving Yisrael Beytenu with its 8-10 as potential decider for who will be Israel's next prime minister

Voting in Israel's Election Day ended at 10pm Tuesday with two of the three main television exit polls predicting that Benny Gantz's Blue and White party will likely claim more seats than Benjamin Netanyahu's ruling Likud party but that the right-wing bloc will ultimately have the higher number of seats.

Neither bloc, however, has enough seats in the 120-member Knesset to claim victory.

Yisrael Beytenu, which is set to win 8-10 seats, has emerged as the likely kingmaker and the decider as to which bloc will ultiately claim the right to form the next government. Liberman is an avowed right-winger, but on Tuesday night repeated his call for a national unity government comprising his party, the Likud and the Blue and White party.

In terms of forming a government, KAN predicts that the right-wing bloc will have 56 seats, while center-left will muster just 54.

Likud MK Miki Zohar expressed disappointment over the results of the exit polls. "I cannot say that we are satisfied with the exit poll results," Zohar, a close ally of Netanyahu, told Ynet. "What we are seeing now is that there is now clear win for the left or the right."

Blue and White MK Hili Tropper, meanwhile, said the exit polls show Netanyahu has failed in the second national vote of the year. "Netanyahu has failed for a second time," Tropper said. "He forced us into elections and he did not make the 61 (MKs he needs for a majority)."

Initial exit polls also indicate the Joint List, an alliance of Arab parties, won around a dozen Knesset seats, making it the third largest bloc in Israel's next parliament.

Ayman Odeh, the leader of the Joint List, told Israeli media that if the final results match the exit polls, Arab voters will have "prevented Netanyahu from forming a government," and the results would mark a "historic" moment for the minority.

The Joint List celebrate the results of the exit polls (Photo: Elad Gershgoren)

Turnout for the second elections of the year was slightly higher than in April.

The leaders of the various parties made public appearances after casting their own votes Tuesday, urging Israelis taking advantage of the national holiday to leave their beaches, shopping malls and cafes to exercise their democratic right.