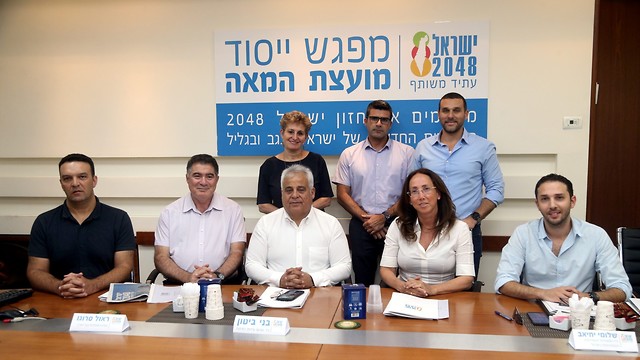 Time for Israel to go green

The elections and the establishment of the next government are an excellent opportunity to promote an initiative that the entire political spectrum agrees on: 'Israel 2048 – A Shared Future' vision to make the Negev and Galilee Israel’s new centers; party representatives have already signed a pact and pledged to promote it after being elected; 'no need to wake up late and lose the most important battle – the campaign that will lead to Israel being the best country in the world,' claim the initiative leaders

On the eve of the elections, it was difficult to find a subject on which parties from all ends of the political spectrum agree, but there was one: the national “Israel 2048 – A Shared Future” initiative, which seeks to promote the establishment of new centers in the Negev and the Galilee.

Candidates not only agree on the issue – they have also stated their intention to work on promoting the initiative and signed a special pact to that effect.

The “Israel 2048 – A Shared Future” initiative has been working with more than 300 senior partners from all sectors and segments of the population for the past year and a half. Now that the core processes have been formulated, it is time to move forward under the next government.

Senior politicians from parties representing the entire political spectrum have already stated their intention to advance the plan for establishing the new centers through the allocation of significant investments in the Negev and Galilee, with the aim of making them home to eight million people.

Over the next few months, efforts will be concentrated on promoting a commitment under the coalition agreements between parties and dedicated legislation for establishing the centers as part of Israel’s goals for 2048.

“The vision of Israel 2048 is one of the main platforms of Blue & White,” says party chairman Benny Gantz.

“We will establish a national authority to deal with the issue and transform the Negev and Galilee into independent centers. We will change the priorities for huge investment and prioritize areas farther from Tel Aviv, as well as leading national planning in light of Israel’s 2048 goals and promoting the retention of young people in the Negev and Galilee,” says Gantz.

The rival Likud party has also been enlisted in the cause. “As a business and social entrepreneur, I understood that the key to continuing the success of the State of Israel is to create demand in the periphery,” says MK Nir Barkat, the former mayor of Jerusalem.

“The plan that I initiated together with Professor Michael Porter for the development of growth engines in the Galilee-Golan, Negev-Arava, and Judea and Samaria relates to exactly this point. Moreover, infrastructure must be developed in the periphery, bringing social impact groups and budgeting communities in the periphery fairly,” he says.

According to Ayelet Shaked, chairwoman of the New Right, the party also “believes in and is committed to the development of all parts of the country in general and to the development of the Negev and Galilee in particular, as centers that provide citizens residing there with high-quality employment, housing, medicine, tourism, culture and transportation. We have a duty to plan and implement significant projects in the Negev and Galilee.”

The leaders of Labor-Gesher, Amir Peretz and Orly Levy-Abekasis, sent this message: “For years, the State of Israel has turned the Negev and Galilee into the backyard although they are actually where the opportunity for the country’s future can be found. We will take the strengths of the Negev and Galilee and in light of the Israel 2048 vision, we will bring to every person in the new centers of Israel, which were once called ‘the periphery,’ a message of growth and prosperity.”

As part of the effort to promote governmental commitment, The Century Group was established; members include leaders of government, business, civil society, and umbrella organizations in the State of Israel. Their aim is to lead a national campaign in the coming years with the ambition of ensuring a significant change, which the public will encounter in the near future.

“They say that it’s impossible, that politicians do not want to think about tomorrow, that the media is only interested in the here and now. Maybe. But we are at a historic moment that can still be changed, “says Roni Flamer, CEO of the OR Movement which is leading the Israel 2048 – A Shared Future initiative.

“We have a responsibility and even if it is unpopular, over the next three years, Israel must decide on its future leading up to 2048. We have brought together hundreds of officials, led by the Century Group, to make sure that the Negev and Galilee are Israel’s new centers, home to eight million people and offering about two million jobs. We don’t need to wake up late and lose the most important battle – the campaign that will lead to Israel being the best country in the world,” says Flamer.

One partner in the initiative is Dimona’s Mayor Benny Biton. He, too, understands that the elections provide an opportunity to lead a change that will propel his city to new heights.

"That is where the true future of the country is found, for residential, employment, and entrepreneurial opportunities. Over the next five years, the state will need to invest in the national “Equitable Cities” plan alongside national, reality-changing projects such as an additional international airport in Nevatim and the Negev intelligence center.”

Shai Hajaj, the chairman of the Center for Regional Councils and of the Merhavim Regional Council, says: “In order for us to prepare for the challenge of the expected population growth, and contend with issues of land, urban-rural ratios, agriculture and development, we will work to advance legislation that regulates planning, rights, investments and the headquarters of the Israel 2048 – A Shared Future vision so that the Negev and Galilee lead the country’s future."

Another partner recruited to the cause is Raul Sarogo, president of the Israel Builders Association.

"We intend to promote, within the Century Group, a new law on issuing tenders in Israel to ensure the regulations and resources needed for realizing the Israel 2048 – A Shared Future vision. The Negev and Galilee will be socio-economic centers, with a wave of development and construction to make a home for millions of people."

“We in the union, together with the OR Movement, will work to help as many young men and women as possible remain in the Negev and Galilee, by offering a comprehensive package and fostering social leadership, who will lead Israel’s next wave of pioneers.”

Produced in cooperation with Israel 2048 - a common future