Benny Gantz speaking Thursday at a meeting of his Blue and White faction
Photo: Avi Hai 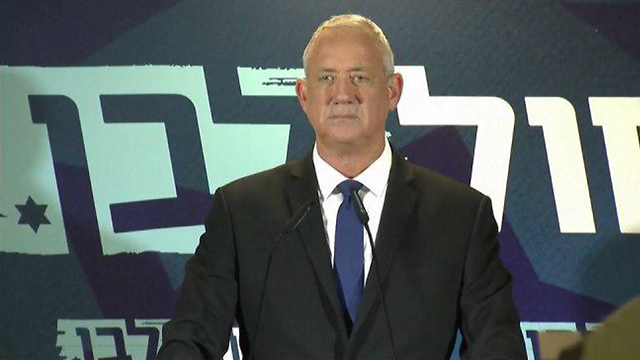 Gantz: I will form a broad, liberal unity government

Blue and White leader says as head of largest party it is up to him to put together next government, says unity is the people's choice and vows to conduct careful and deliberate negotiations to achieve it ; Liberman calls on Netanyahu to end his 'political shticks and tricks'

Israelis have voted for a unity government, Blue and White leader Benny Gantz said Thursday, adding that he intend to be the one to achieve this as head of the party that apparently has the most number of seats in the next Knesset.

Gantz said unity was the people's choice and stressed that he would conduct careful and deliberate negotiations to achieve it.

Benny Gantz speaking Thursday at a meeting of his Blue and White faction (Photo: Avi Hai)

"We will not concede to anyone. I will conduct the negotiations with responsibility and judgment in order to achieve the best for the citizens of Israel in the political circumstances that have been created," the Blue and White leader said.

"It will require determination and adherence to our principles," he said. "There will be no shortcuts. The government that I establish must be effective and capable of real action and governance."

The former IDF chief turned politician was speaking hours after Prime Minister Benjamin Netanyahu issued his own online video appeal for Gantz to join him in a unity government.

Gantz made no mention of the prime minister and said he himself would head a "liberal" coalition, political shorthand for one that excludes Netanyahu's long-time ultra-Orthodox allies.

But he then left it to Moshe Ya'alon, a fellow former IDF chief and Blue and White leader, to deliver a stinging rejection of a partnership with Netanyahu, citing looming corruption charges against the prime minister, who has denied any wrongdoing.

"We will not enter a coalition led by Netanyahu," Ya'alon said, echoing a position Gantz had taken throughout the election campaign and appearing to suggest that an alliance with Likud would be possible if it dumped its veteran leader.

"The time has come for you to tell Netanyahu, 'thank you for all you've done'," Ya'alon urged Likud members - who have shown no sign so far of rebellion.

In his video earlier, Netanyahu insisted he would be the one to form the next goverment.

"During the elections, I called for the establishment of a right-wing government. But unfortunately, the results of the elections show that this is not possible," Netanyahu said.

"Now I say to you, MK Benny Gantz: Benny, we must establish a broad unity government today. The people expect us, both of us, to show responsibility and work to cooperate."

"Bibi (Netanyahu) has decided to go with a third election and is already trying to push the blame onto us," the official said. "If he steps aside, there will be a unity government within a day."

Yisrael Beytenu leader Avigdor Liberman also blasted Netanyahu on Thursday for what he called his "political exercises, shticks and tricks."

"Let's sit down - you, Benny Gantz and myself, and establish a broad, liberal national government for the future of the State of Israel," Liberman said.

"In fact, Netanyahu is operating simultaneously on two channel," he said.

"On one hand, he is trying to numb the system as he calls for unity and on the other hand continues his attempts to persuade MKs from other parties to join him and the bloc he established yesterday in order to reach a majority of 61 (Knesset) seats.

"If he fails to get that majority, he will lay the blame for the failure of a unity government on Gantz and on me, and take the State of Israel into another election campaign."

With 96.5 percent of the vote counted Thursday, Blue and White was on track to win 33 seats in the 120-strong Knesset, while Netanyahu's Likud trailed slightly behind with 31 seats.