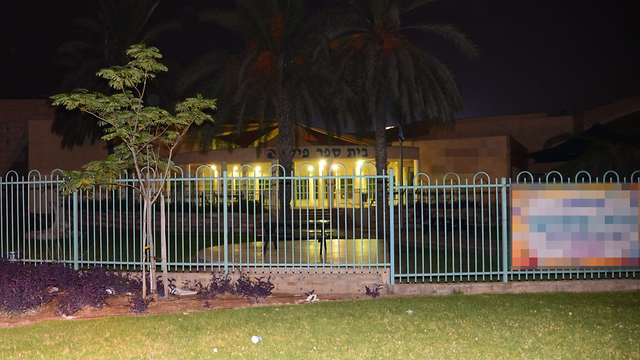 Police arrest 3 suspects after the teen claimed 4 of her schoolmates dragged her to the school's bomb shelter, tied her up, taped her mouth and took turns raping her while filming the ordeal; 'She won't eat or drink' says her father

The father of a 13-year-old girl allegedly raped by four other teens at her middle school’s bomb shelter in southern Israel says their family has been destroyed since the teen came forward with the allegations about the horrific ordeal last Friday.

Three suspects have been arrested so far in the case after the teen said she was dragged to the shelter of the school, had her hands tied and her mouth taped up. According to the complaint, two of the teens guarded the doors while the other two raped the 13-year-old. Then, the girl claims, the teens switched and those initially guarding the entrance began assaulting her while filming the ordeal.

"On Friday, she told me, 'Dad, I want to talk to you,'" said her father. "I asked her what happened. She said 'Dad, don't get upset but I’ve been raped by four boys. She hasn’t stopped crying. Her mother is heartbroken, and I just keep asking where were the school staff?"

The main suspect, a 16-year-old, was arrested on Saturday and appeared in court in the southern city of Be'er Sheba, where he denied all the allegations against him and claimed to have never met the victim. Two other suspects were detained on Sunday morning.

The 13-year-old’s family said she was an introverted and shy girl who had been sexually assaulted in the past. The family, however, didn’t make a police complaint as the accused at the time had not reached the age of criminal responsibility.

"She will not eat or drink and just walks around the house like a ghost. She said one of the boys took her to the cafeteria and from there dragged her to the shelter,” said her father.

"They have destroyed an entire family. They have murdered her and us. She’s like a zombie.”

The school counselor said she was the first person the girl confessed to about her ordeal, after noticing the girl was in distress. It took the professionals at the school nearly two hours to convince the girl to tell them what had happened to her.

The teen said she was afraid of how her relatives would react to the news and was escorted home by school personnel. On Friday, the family filed an official police complaint and the teen was taken to the child investigator.

The police said the videos allegedly recorded by the suspects during the rape have so far not been recovered.