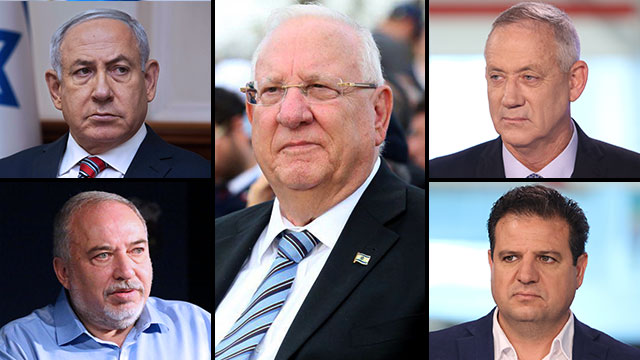 Rivlin kicked-off consultations with the parties that captured seats in 120-member Knesset last week, with the Arab-dominated Joint List - the third largest faction behind Netanyahu's Likud and Gantz's Blue and White – endorsing Gantz for prime minister

The Joint List of Arab parties on Sunday said it backed Benny Gantz as the one to form the next government, while the former military leader’s party said it was willing to let Prime Minister Benjamin Netanyahu attempt to put together a coalition first.

Neither Gantz’s center-left bloc nor Netanyahu’s right-wing bloc was able to muster the support of the 61 lawmakers they need to build a government in the 120-strong Knesset.

President Reuven Rivlin on Sunday began consultations with the party leaders in an effort to nominate a prime minister who will be tasked with forming government after no clear winner emerged following last week's elections.

In a rare occurrence in Israeli politics the Joint List of Arab parties decided they would recommend Blue and White leader Benny Gantz be tasked with forming a new government.

“Benny Gantz is not our cup of tea. We have criticism of him from here till tomorrow,” said lawmaker Ahmad Tibi. “But we promised our constituents that we would do everything to topple Netanyahu and the default here is recommending Benny Gantz.”

By supporting the candidacy of the former military chief of staff, the joint list has put the Blue and White Party on top with support from 57 of the 120 Knesset seats.

Avigdor Liberman leader of the Yisrael Beiteinu Party announced his faction will not recommend either Benjamin Netanyahu or Benny Gantz for the position of prime minister.

Liberman told his party members he is staying true to his promise to voters and will not support a Netanyahu led coalition with the ultra-Orthodox parties and the far-right, nor can he support Blue and White as they will be backed among others by the Joint List of Arab parties - whom he describes as enemies.

The president is expected to announce his choice once he has met with all the parties that captured seats in the 120-member Knesset. Under Israeli law, after consultations with the parties the president taps a legislator whom he believes has the best chance of forming a government, delegating 28 days, with a two-week extension if necessary, to complete the task.

Rivlin told the party representatives that it is imperative for Israel to have a stable government to meet the challenges facing the country.

The president also asked both Blue and White and Likud delegates if they agree to return the mandate given their parties back to the president in the event that they fail to establish a viable coalition. Both parties agreed

The Joint List told the president they see Benny Gantz as their candidate.

President Reuven Rivlin with Join List delegation (Photo: Flash 90)
“It is an interesting position, never before held by someone from the Arab population. It has a lot of influence,” Ayman Odeh, leader of the Joint List, told reporters outside his home in Haifa, a mixed Arab and Jewish city in northern Israel. A surge in turnout gave the Arab-dominated Joint List 13 of the Knesset’s 120 seats, making it the third-largest grouping behind Likud, and Blue and White.

"The assessment which emerges from the talks with Netanyahu and other right-wing parties is that Gantz can’t form a government,” said one Likud source. “Gantz has no other option because Liberman will not sit in government with Meretz that relies on the opinion of the Arabs.”

The process is expected to last at least two days with the meetings being broadcast live for the purpose of transparency.