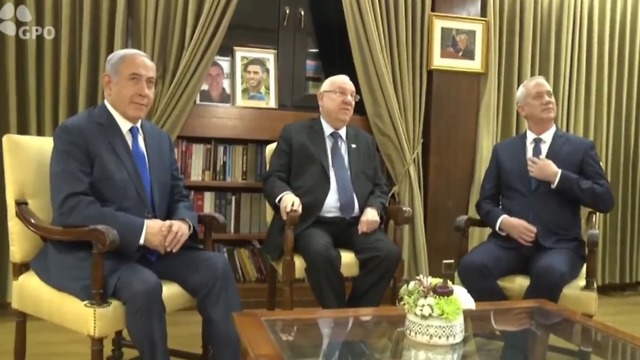 Rivlin after meeting with PM hopefuls: 'we have taken a significant step forward tonight'

After an hour-long meeting with PM hopefuls, President Reuven Rivlin believes meeting was a significant step; 'a shared and equal government is possible'

"We have taken a significant step forward tonight, and now the first challenge is to establish a channel of direct communication between the sides," said Rivlin.

In the meeting, the president made it clear that at the end of his consultations with the parties, no candidate had the support of a majority of Knesset members to form a government, and therefore his discretion was even greater.

President Rivlin stressed his belief that the current situation, where Israel has an interim government, is gravely harming Israeli citizens and Israel's ability to address the challenges the country faces.

The president also urged Netanyahu and Gantz to do anything in their ability to prevent an unprecedented third elections.

“The people expect you to find a solution and to prevent further elections, even if it comes at a personal and even ideological cost. This is not the time to exclude people," said Rivlin. "A shared and equal government is possible. It can and it must express the different voices in society”.

The three met without advisers, after Rivlin earlier Monday wrapped up crucial talks on forming new government as he met with the smaller parties elected in last week's vote.

Netanyahu's right-wing bloc appears to be leading Gantz's center-left bloc 55 to 54 Knesset seats after the Arab-dominated Joint List said it was withdrawing some of its members' recommendations for the Blue and White leader.

Neither party can form a coalition without the eight seats won by firebrand former Defense Minister Avigdor Lieberman, who on Sunday declined to endorse either candidate for prime minister.

Lieberman has pushed Gantz and Netanyahu to agree to sit with him in a broad, secular unity government, and both have agreed in theory but disagree over who should head it. Gantz has also vowed not to sit with Netanyahu so long as he faces a likely indictment over a number of corruption scandals.

Following the meeting, Avigdor Liberman said the two leaders exchanged views and will meet again should the need arise.

Neither Likud Gantz’s Blue and White could muster enough Knesset seats in the September 17 elections to form a clear majority coalition.

Blue and White emerged with a slight advantage by winning 33 out of 120 seats, with Likud gaining 31 seats.