President Rouhani in an interview to Fox News 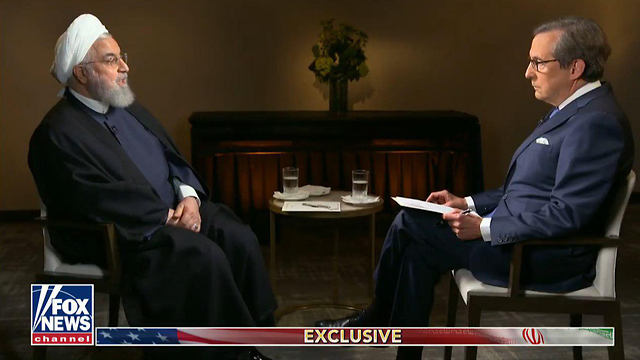 Hassan Rouhani claims Israel treating IS fighters and arming them as well; Rouhani is set to meet French president, British PM for second time this week on sidelines of the UN General Assembly

Iranian President Hassan Rouhani told an American news outlet Tuesday that Israel is both treating Islamic State fighters wounded in Syria and arming the organization as it battles Syrian forces and their allies.

"Israel is the country that takes care of the injured IS fighters, and make weapons available to them," Rouhani said.

"You should visit Israeli hospitals and see the injured Daesh (Islamic State) war fighters, and how they're being taken care of. You should see the weapons captured from ISIS fighters and see that they are Israeli made."

The Iranian president who is in New York for the UN General Assembly told Fox News that "on a daily basis, Israel targeted the people of Palestine, Lebanon and most recently Iraq and even Syria."

"Today, America, unfortunately, is the supporter of terrorism in our region -- and wherever America has gone, terrorism has expanded in its wake." Rouhani said.

When asked by interviewer Chris Wallace if he intends to meet with President Donald Trump on the sidelines of the UN General Assembly taking place this week in New York, Rouhani said that the White House must first ease its restrictions on his country.

"Trust must be restored, and the restoration of trust consists in taking away the pressure imposed upon the nation and the people of Iran, which show that clearly there is animosity even towards our children, our ill people, because we - they - even have difficulty in obtaining basic medications and medical equipment."

Rouhani added: "This is a type of terrorism. This is inhumane, and if there is a cessation to this, then, of course, the atmosphere will change. Of course, then it can be envisioned, and we can talk about many different topics of mutual interest for both sides."

According to Rouhani, the trust between the two countries was broken when Trump walked away from the Iranian nuclear deal last year.

"We must create mutual trust, and the trust that is something that Mr. Trump took away from this framework. We had an agreement. Mr. Trump exited without a valid justification, and illegally, from an international agreement."

President Rouhani met with both French President Emmanuel Macron, and British Prime Minister Boris Johnson on Tuesday, and was set to meet with them for a second time on Wednesday.

Macron told reporters following his meeting with the Iranian president that the conditions for a meeting between Rouhani and Trump are in place, but the actual meeting between the two is ultimately up to them.

"There is a will to go forward, not just to prevent escalation, but to achieve long lasting agreements," Macron said.

In his speech to the General Assembly on Tuesday, Trump warned Iran that the sanctions would only worsen if it continued to pursue its current course of actions.

The president called the regime in Iran a tyrannical one, and the number one funder of global terrorism.

He called for Iran's leaders to step down. "It's time the Iranian leadership put it's people first " Trump said.