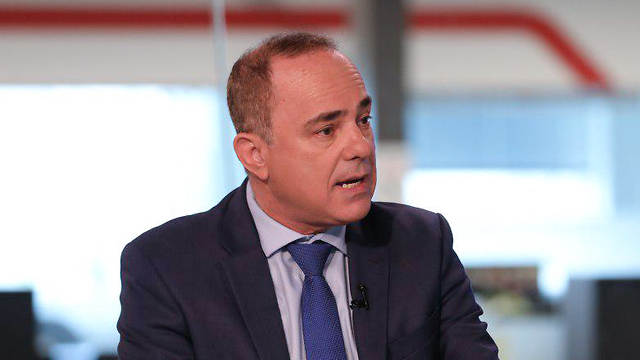 'We are on the verge of the Iran situation blowing up,' Netanyahu ally Steinitz warns, while Blue and White says Likud is determined to drag country into third round of elections unless Gantz's party accedes to its terms and allows Likud leader to remain as PM despite criminal investigations

After talks on a unity government between Israel's two biggest parties appeared to stall again Friday, an ally of Prime Minister Benjamin Netanyahu warned Friday that Likud and Blue and White needed to come together to face an Iranian threat.

Energy Minister Yuval Steinitz warned that tensions between Iran and the United States were reaching a breaking point and a unity government deal was needed to stave off the threat of conflict.

Steinitz, who is also a member of the security cabinet, warned "we are on the verge of the Iran situation blowing up."

Neither Netanyahu's Likud party nor the center-left Blue and White, headed by former military chief Benny Gantz, can muster the 61-seat bloc needed to form a stable government.

The two parties have been meeting to discuss a unity government, although talks Friday morning appealed to stall once again.

"(The) chances of an American-Iranian or Saudi-Iranian blow-up, or a blow-up in the Gulf which, if it happens, is liable to reach us too, is something that is very, very tangible and realistic," Steinitz told Tel Aviv radio station 102 FM.

Likud won 32 seats in the 120-member Knesset, while Blue and White won 33 seats. Likud has a bloc of 55 Knesset members drawn from the right-wing and ultra-Orthodox parties and Blue and White has a slightly smaller bloc made up of centrist, left-wing and Arab parties.

Members of the Likud negotiating team, ministers Yariv Levin, left, and Ze'ev Elkin during talks with their Blue and White counterparts in Jerusalem on Friday (Photo: Moshe Mizrahi)

After negotiators met in Jerusalem on Friday morning, Blue and White accused Likud of inflexibility and being ready to force a third round of elections in a year on the country in order to avoid concessions demanded by Gantz's party.

"The Likud negotiating team has become entrenched and has assumed that Blue and White will agree for Netanyahu to continue to serve as prime minister and that the government formed will be based on a bloc of 55 MKs," the center-left party said in a statement.

The statement said that it has long been common knowledge "that Blue and White will not agree to these conditions and they aim to drag the State of Israel into third elections, which is what the prime minister wants."

Gantz, who served as IDF chief under Netanyahu, has refused to sit in a government with the prime minister due to his three separate criminal investigations, and who will next week face a hearing ahead of potential indictments.

President Reuven Rivlin has been pressing both parties to form a unity government in an effort to avoid a third round of elections after national ballots in April and September.

Rather than see Gantz try to form a coalition after the April vote, when Netanyahu failed to do so, Likud pushed through a resolution to dissolve the Knesset and hold an unprecedented second election in six months.

Rivlin on Wednesday tasked Netanyahu with the first round of efforts to form a new government coalition, allotting him 28 days to do so, with a possible two-week extension. If he is unsuccessful, he will hand the mandate back to Rivlin, who is likely to then appoint Gantz to the task.

Rivlin on Wednesday presented both sides with a compromise formula in which Netanyahu would recuse himself if indicted, but not step down. Likud agreed to the proposal, but Blue and White has yet to respond.

The proposal outlined by the president states that Netanyahu could serve as prime minister in a rotation government with Blue and White as long as he was not indicted for any or all of the three corruption cases pending against him.

If an indictment were brought, Netanyahu would recuse himself and Gantz would assume the role of acting prime minister.

The recused premier would not be made to vacate the official residence nor would he be forced to resign.