Palestinians demonstrate with signs in support of, and with the pictures of Samer al-Arbeed 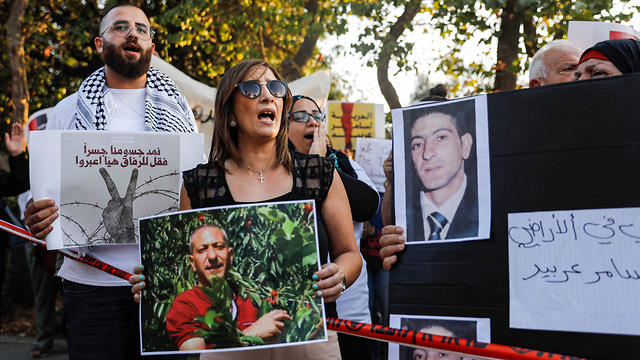 Palestinians protested in Jerusalem and the West Bank on Tuesday evening after a detainee suspected of killing an Israeli teenager Rina Shnerb in a bomb attack was hospitalized during interrogation by Israeli forces.

The defense establishment said Saturday that Israeli security forces arrested the terrorists involved in constructing and detonating an improvised explosive device that killed the 17-year-old near the West Bank settlement of Dolev last August. The four suspects, all residents of the West Bank and members of the Popular Front for the Liberation of Palestine, were detained in a joint operation involving the Shin Bet domestic security service, the Israel Defense Forces and Israel Police.

Palestinians demonstrate with signs in support of, and with the pictures of Samer al-Arbeed
In the West Bank city of Ramallah, 300 protesters burned tires and hurled stones at Israeli troops who took up positions in fields nearby. As masked demonstrators blocked roads, the troops responded with tear gas, sound bombs and jets of foul-smelling water in clashes that lasted about three hours.

Around 50 Palestinians demonstrated in Jerusalem before police dispersed the protest and detained three people.

The protests follow the arrest, detention and later hospitalization of the 44-year-old Samer al-Arbid, who has been held since September 25 on suspicion of orchestrating and carrying out the attack which killed Shnerb while she was on a hike with her family near the Danny Spring.

Rina Shnerb and the four terrorists arrested on suspicion of killing her (Photo: Courtesy of)

Palestinian officials have accused the Israeli authorities of torturing al-Arbid during questioning.

Israel’s internal security service, the Shin Bet, said on Sunday that during his interrogation al-Arbid said he was feeling unwell and was taken to hospital for examination and treatment. Arbid’s lawyer, Mahmoud Hassan, said he had been to a Jerusalem hospital on Monday to see his client.

Palestinians demonstrate with signs in support of, and with the pictures of Samer al-Arbeed

Hassan said al-Arbid was in critical condition “as a result of the severe torture he endured during a lengthy interrogation as a suspect in the bombing.”

A hospital spokeswoman declined to comment on al-Arbid’s condition and referred further questions to the Shin Beit, which said that the investigation was still underway and that it would therefore provide no further details. However, it had earlier said that al-Arbid and two other Palestinians in his ring were planning more attacks against Israelis, and that another bomb was found in their possession.