Preparations for inauguration of the new Knesset
Photo: Amit Shabi 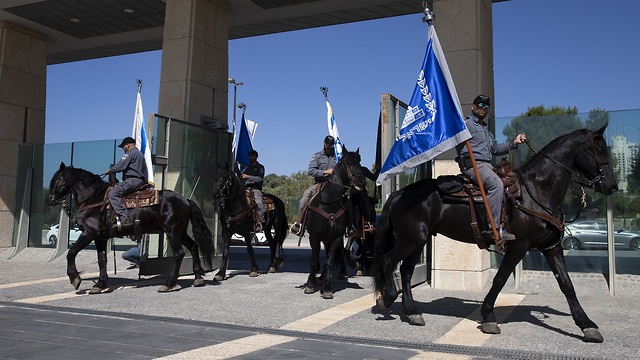 Israel's 120 parliamentarians were to be sworn in at the Knesset on Thursday afternoon, 156 days since the last time they took the oath of office and 127 days since they voted to dissolve parliament and hold the second round of elections in a six-month period. With Prime Minister Benjamin Netanyahu struggling once again to put together a coalition, lawmakers will gather in Jerusalem at 4pm, and each will rise, one by one, to take the pledge, knowing that the country is facing the extraordinary prospect of a third round of elections within a year.

Preparations for inauguration of the new Knesset (Photo: Amit Shabi)
The events of the day, which officially began at around 8 am, includes a march along a red carpet, a festive reception on the balcony of the Chagall Lounge and a reception hosted by President Reuven Rivlin.

Preparations for inauguration of the new Knesset (Photo: Amit Shabi)

After the inauguration in the Knesset plenum, the newly sworn-in Knesset members were to attend a toast during which the traditional "family photo" of the elected faction leaders was to take place.

Rolling out the red carpet ahead of the Knesset inauguration ceremony (Photo: Amit Shabi)

Preparations for inauguration of the new Knesset (Photo: Amit Shabi)

Knesset Speaker Yuli Edelstein welcomed the new lawmakers with a warning against excessive proposals of legislation. In the last Knesset, some 500 bills were put forward by MKs, but only one – the dissolution of parliament – was presented for the three votes in the plenum that are required for passage.

Benjamin Netanyahu, Avigdor Liberman, Benny Gantz and Yuli Edelstein at the opening the last Knesset in May (Photo: Amit Shabi)

There are just 28 women in the 120-strong new Knesset, but only one - New Right leader Ayelet Shaked – is the sole head of a party. Orly Levi-Abekasis is joint leader of Labor-Gesher alongside MK Amir Peretz.

The Joint List of Arab parties said Wednesday that it would be boycotting the day due to a general strike by the Arab community to protest the lack of police response to growing violence within the sector.